Atmosphere of fear and discrimination for French Muslims after Nice attack 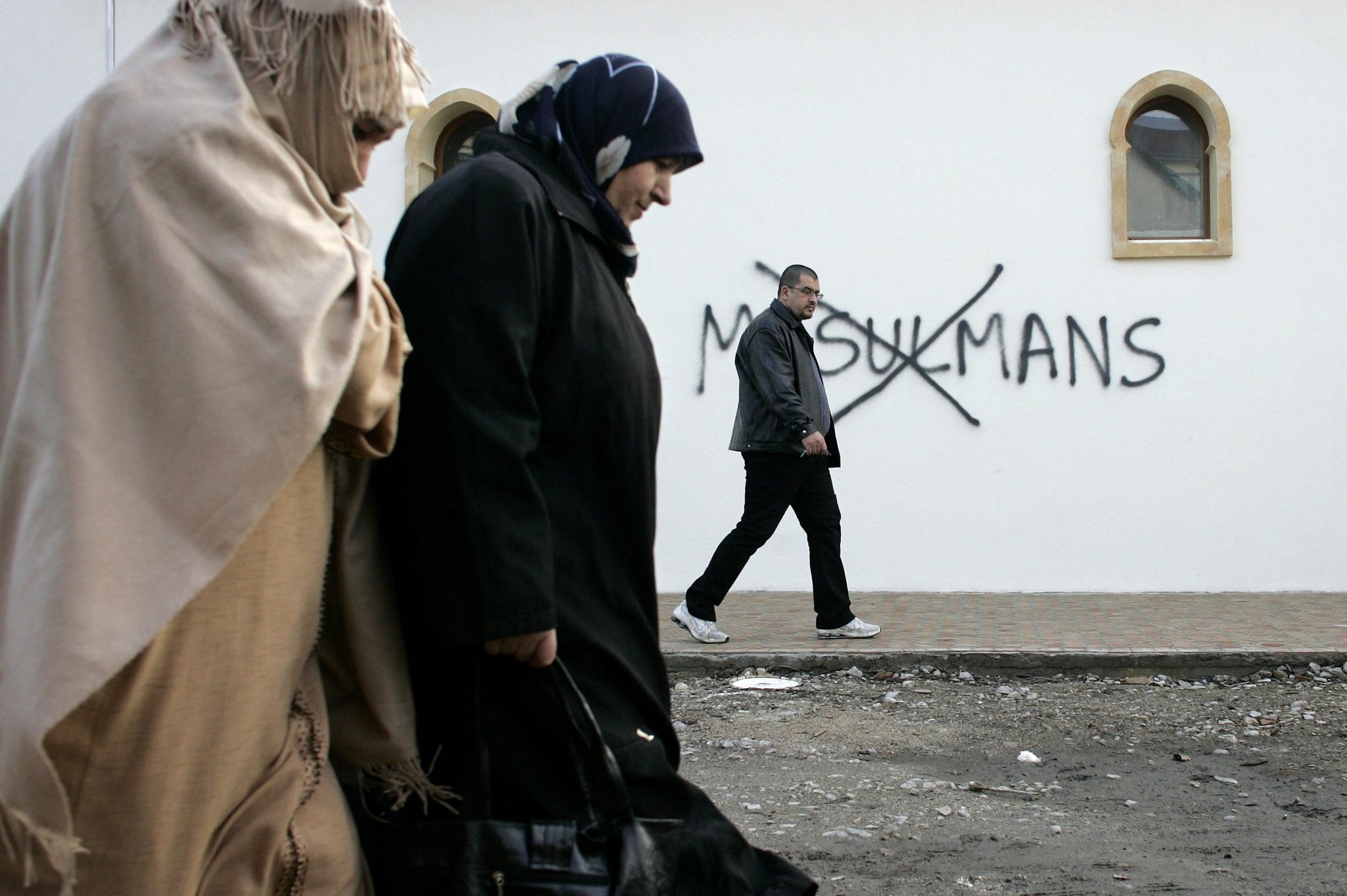 In this Monday Feb. 8, 2010 file photo, Muslim residents walk past racial slurs painted on the walls of a mosque in the town of Saint-Etienne, central France. (AP Photo)
by Daily Sabah with Reuters Jul 18, 2016 12:00 am

After 84 people were killed during an attack on a Bastille Day celebration in Nice, France, Muslims are once again being targeted fortheir religion. Amid the growing feeling of alienation, many Muslims say they face religious discrimination in Nice and elsewhere

In the poor Nice suburb of Ariane, many Muslims feel their community is being unfairly blamed for the Bastille Day attack that killed 84 people, and fear discrimination and social divisions will grow in its wake.

DAESH claimed the attack and hailed as one if their soldiers the Tunisian-born Mohamed Lahouaiej Bouhlel, who drove a truck through a crowd of celebrants on the French city's sea-front promenade last Thursday.

Prime Minister Manuel Valls said during the weekend that the 31-year-old attacker had been "radicalized very quickly." The Paris prosecutor said on Monday that, while there was no evidence that he had direct links to DAESH, he had recently developed an interest in extremism.

In Ariane, a district with a big Muslim population a few kilometers from the Abbatoirs neighborhood where Bouhlel lived, the imam of the local Al Fourkane mosque cautioned against focusing on the killer's faith.

"Because the weak are being exploited doesn't mean that we should come down hard on their religion. Quite the opposite. We should be uniting together and defending the country," said Boubekeur Bekri, adding that "a crime is a crime" regardless of faith. Bouhlel left Tunisia in 2005. His family has painted a picture of a man who suffered "psychiatric troubles" and was prone to depression and violent outbursts. He had several run-ins with the law, including a conviction in March this year for hurling a wooden pallet in a road rage incident.

Relatives and friends of Bouhlel also described a man who at least until recently drank heavily, smoked marijuana and womanized – behavior at odds with a devout Muslim life.

Elabed Lofti, the imam for Antibes and Juan-Les-Pins, is among Muslim leaders in southeastern France who have distanced their community from the attacker. "The guy didn't observe Ramadan, the minimum to be considered a good Muslim," he said, referring to the Muslim fasting month that ended in early July.

France is home to Europe's largest Muslim minority. In a sign of the growing feeling of alienation among many Muslims in Ariane and elsewhere, Younis, a roof-builder born to Moroccan immigrants, said the whole community was blamed "every time something happens in France, in Europe."

"Once the problem was racial discrimination, now its religious discrimination," said Younis, who declined to give his surname, sitting at the entrance to a dreary eight-story block of flats opposite the suburb's small mosque.

For decades Nice, better known for the super-yachts that anchor in its cobalt blue waters and palm-fringed boulevards, has been a gateway for waves of immigrants arriving from France's former colonies such as Tunisia, Morocco and Algeria.

DAESH has lost much territory in Iraq and Syria this year and some officials fear it may be calling on adherents to conduct high-visibility attacks.

Regardless of whether Bouhlel is proven to have direct links to DAESH, his profile chimes with the findings of a recent Europol study of foreign militant recruits. The study showed that about four in every five DAESH recruits have criminal records, while some 20 percent were diagnosed with mental health issues.

Psychologist Brigitte Juy counsels Muslim youths who feel marginalized and angry at French society and may be vulnerable to militant recruiters and others who have been exposed to extremism, including some who have returned from Syria.

Juy said accounts of Bouhlel's character by relatives and neighbors reported in the media appeared to portray an unstable character who felt isolated and was susceptible to violent outbursts. In this sense, she said, Bouhlel, was not necessarily an isolated case.

"It's a profile that we see out there," Juy said. "And then at a certain moment different factors might collide, including perhaps in the personal life, which means that a tipping point is possible and the ground is laid for them to seek a 'remedy' to settle their score ... by committing an atrocity."

This is not the first time that Muslims and migrants have felt targeted because of their religion after an extremist attack. Many Muslims felt obliged to speak out against terrorism and say the killings do not represent their faith, especially after attacks by DAESH extremists in Paris that killed 130 people in November. Similarly, after French satirical magazine Charlie Hebdo was attacked by two assailants in France on Jan. 7, 2015, which left 17 people dead, a spike was observed in Islamophobic attacks. Muslims make up the largest proportion of victims of DAESH and other terrorist groups' violence, since most of the attacks take place in Muslim- majority countries and often target other Islamic communities.