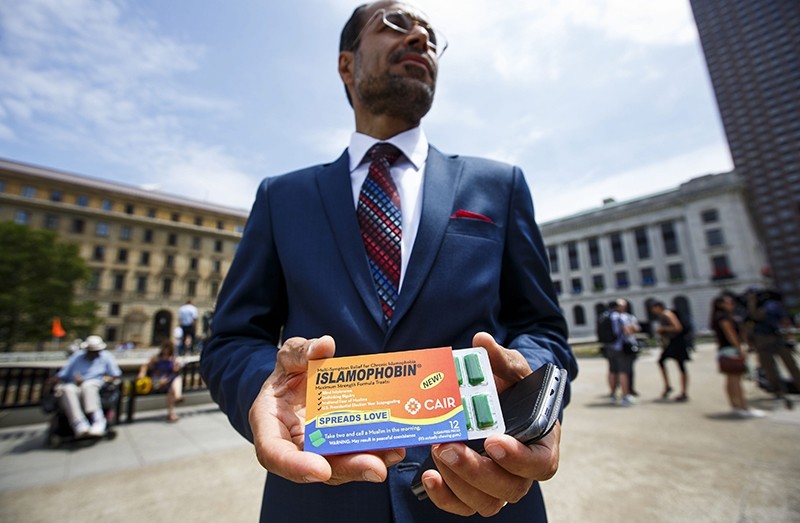 Nihad Awad, the National Executive Director of Council on American-Islamic Relations, holds a pack of chewing gum the group made called 'Islamophobin'. (EPA Photo)
by reuters Jul 19, 2016 12:00 am

The normally straight-laced Council on American-Islamic Relations tried humor to win over Republicans at their national convention on Monday, handing out packets of a satirical medicine called "Islamophobin," a treatment for Islamophobia.

On the first day of the Republican convention to nominate Donald Trump for the Nov. 8 election, CAIR leaders urged the party not to push Muslims voters away.

Trump has proposed a temporary ban on Muslims entering the United States. He opposes letting in refugees from the Syrian war, suggesting some may be militants posing as the downtrodden. He has made claims, unsupported to date, that thousands of Muslims in New Jersey openly cheered the Sept. 11, 2001, attacks.

In an interview broadcast Monday on CNN, Trump's wife Melania, due to speak at the convention later in the day, said of her husband: "He's not racist, he's not anti-immigrant," and added, "He wants to keep America safe."

"Too often over the course of this campaign, Republican presidential candidates have pandered to these inner-core Islamophobic leaders and their supporters with proposals like patrolling so-called Muslim neighborhoods, surveilling and shutting down mosques, and openly questioning whether a Muslim can serve as president," Awad said.

As a prescription, Awad offered Islamophobin, a concept borrowed from Muslims in Sweden who created a similar product. CAIR sells a package of 12 sugar-free pieces for $1.99 on amazon.com.

The package says: "Take two and call a Muslim in the morning."

But it comes with a warning.

"Those who already believe in religious diversity, tolerance and mutual understanding should not use this product," the package says.

"Stop taking this product if you begin to develop warm feelings toward Muslims, immigrants or refugees."

Nearby at a separate event, Christian demonstrators tried to eclipse a speech by Rose Hamid, a Muslim woman who was ejected from a Trump rally in South Carolina in January for her silent protest, by standing up wearing her head scarf and a T-shirt reading, "Salam, I come in peace."

As Hamid spoke in favor of a peaceful coexistence at a platform in Public Square set aside for scheduled speeches, the small group behind her hoisted signs such as one saying, "Muhammad is a liar, false-prophet, child-raping pervert."

When they tried to drown out Hamid with a bullhorn, she turned around to see them for the first time and remarked, "Oh, they're lovely." Police then removed them from the scene for demonstrating without a permit.