This woman just gave the perfect response to hatred and Islamophobia: A calm and defiant smile 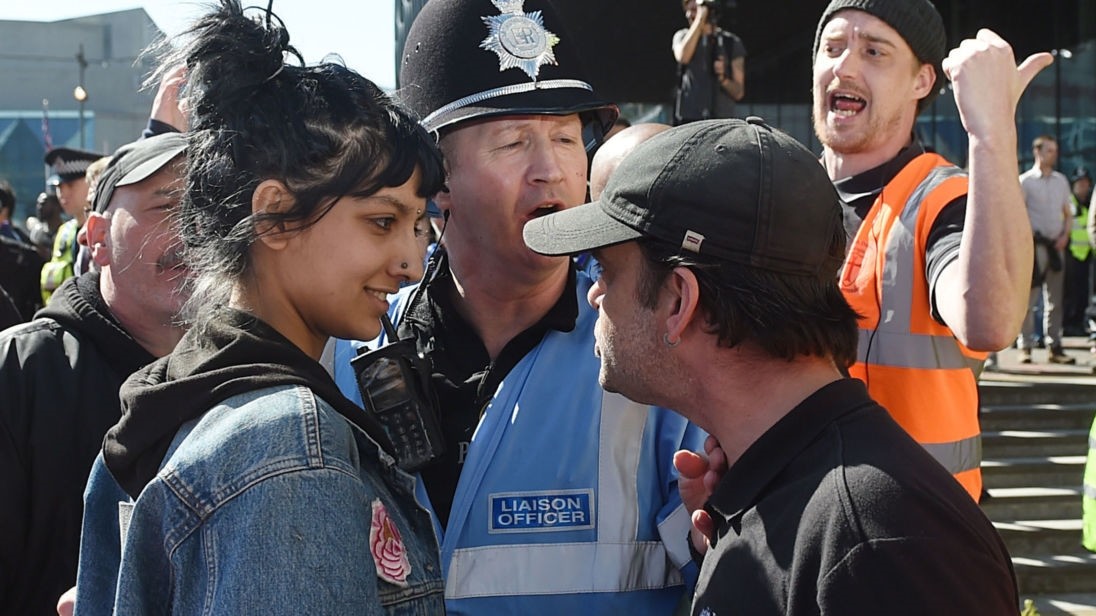 In the wake of terror attacks in Brussels, Westminster and Stockholm, far-right parties and organizations across Europe are taking advantage of the rising Islamophobic and anti-EU sentiment – and Britain is no exception.

Amid a far-right populist resurgence and discontent with the European Union, a far-right group, the English Defence League (EDL), held a racist and xenophobic demonstration in Birmingham city center on Saturday.

Later in the protest, a group of EDL supporters surrounded and confronted a woman wearing hijab, to add to their ever-long list of anti-Muslim harassment.

But a young woman had the courage to take a stand against them, nonchalantly and defiantly smiling in the face of the far-right.

The woman, now identified as Saffiyah Khan, intervened to help the Muslim woman, and confronted the EDL protesters by just smiling at them, with her hands still in her pockets.

Her stand-off with the EDL leader was captured by a photographer and has since gone viral.

Much like the iconic Baton Rouge photo of Ieshia Evans or Pauline Bercker in the 1969 equal pay protests in London, Khan's photo has now become a symbol of defiance, of women on the front line of resistance.

Born in the UK to Pakistani and Bosnian parents, Khan told the BBC that she felt compelled to confront the EDL leader and other EDL members because of the way they were harassing the Muslim woman.

"A group of 25 quite big-looking EDL lads, they surrounded her. She was terrified. I don't like seeing people getting ganged up on in my town," she said.

"He was poking his finger in my face, but I just stood there," Khan told British daily The Mirror.

The now-iconic photograph was tweeted by Birmingham Member of Parliament Jess Phillips with the caption:

Who looks like they have power here, the real Brummy on the left or the EDL who migrated for the day to our city and failed to assimilate pic.twitter.com/bu96ALQsOL


In an interview with BuzzFeed, Khan said that she decided to go to the EDL protest "because there is a history of harassment and assault of Muslims, vulnerable members of the public and people of color at the demos and outside of it".

She said that she wanted to show support "for anyone who was assaulted or harassed by them".

The EDL protester -and also the leader of the group- she confronted, Ian Crossland, later described her as a 'left wing scrubber' who is 'lucky to have teeth left in her mouth' in a Facebook post.

Referring to Islam as a "barbaric evil cult," the EDL often holds demonstrations to protest immigration and multiculturalism.