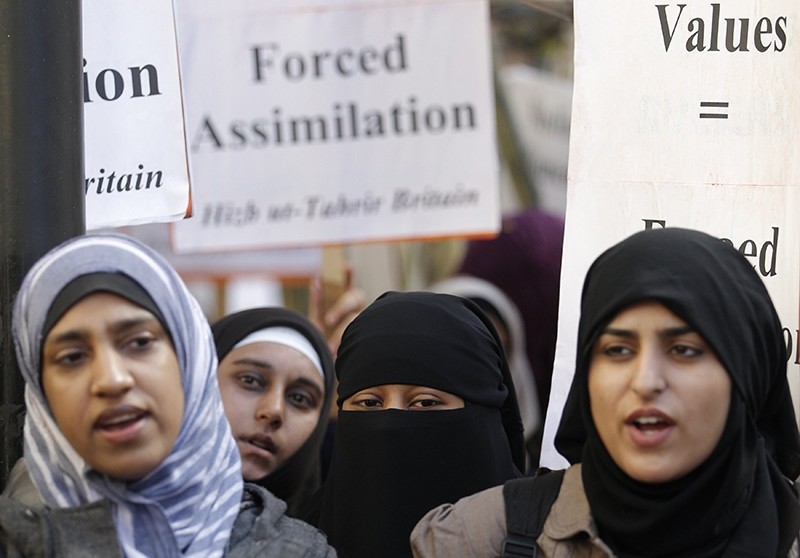 Muslim woman take part in a demonstration by the Islamic political party Hizb ut-Tahrir against France's banning of full face veils from public spaces, outside the French Embassy in London September 25, 2010. (Reuters Photo)
by Daily Sabah with Agencies May 17, 2017 12:00 am

The Austrian government passed legislation on Tuesday, outlawing the use of garments that fully cover the face of women, such as the burqa, as well as the distribution of the Holy Qur'an in public.

The provision is part of a larger integration law, work on which was not blocked despite recent instability in the ruling coalition that means parliamentary elections have been pulled ahead a year, to October.

Starting in October, people wearing garments in public that cover a woman's face will be subject to fines of 150 euros (166 dollars).

It is not clear how many people would be affected by the measure. It has received criticism from both political extremes, in some cases for not being tough enough.

Other parts of the legislative package prohibit distributing the Qur'an and require all migrants in Austria to participate in an integration year during which they would learn German and ethics. That measure is targeted at refugees and asylum seekers viewed as having a good chance at remaining in Austria.

Asylum seekers would also be expected to perform unpaid public work. Anyone refusing to do so would lose out on benefits. The proposal is allegedly designed to make migrants better suited for the Austrian labor market.

In Austria, Islam is the second most widely professed religion, practiced by 7 percent of the population or around 600,000 people, according to the Islamic Religious Community.

The country has been spared the kind of extremist attacks suffered by Germany, France and Belgium. But fears and tensions have been growing over the past months, fuelled by anti-migrant campaigns of the popular right-wing Freedom Party (FPO).

France, which has the largest Muslim minority in Europe, estimated at 5 million, in 2010 introduced a ban on full-face niqab and burqa veils in public.