Counter-protests overshadow anti-Muslim rallies across US 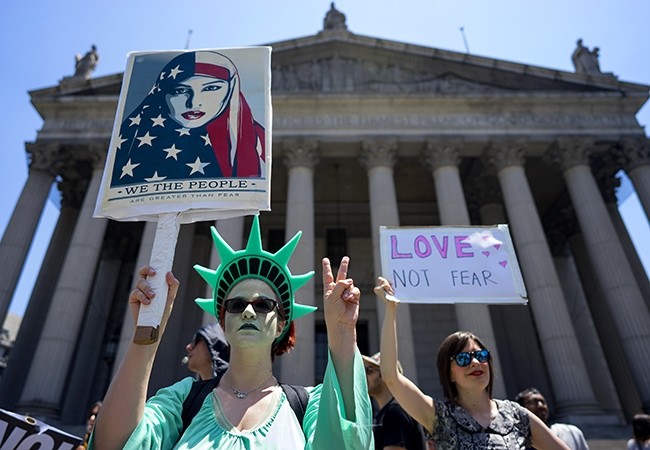 Demonstrators at small but raucous gatherings around the country Saturday raised the specter that interpretations of Islamic law might somehow spread across the U.S., but many of the rallies drew even more boisterous counter-protests by people who called such fears unfounded.

Hundreds of counter-protesters marched through downtown Seattle, banging drums, cymbals and cowbells behind a large sign saying, "Seattle stands with our Muslim neighbors."

Participants chanted, "No hate, no fear, Muslims are welcome here," on their way to City Hall, where dozens of anti-Shariah protesters rallied.

A phalanx of bicycle police officers kept the sides separated during the sanctioned events, but authorities said a large fight broke out after the gatherings concluded. Police used tear gas to disperse rowdy demonstrators and arrested three people for obstructing law enforcement.

In front of the Trump building in downtown Chicago, about 30 people demonstrated against Islamic law and in favor of President Donald Trump, shouting slogans and holding signs that read "Ban Sharia" and "Sharia abuses women." About twice as many counter-protesters marshaled across the street.

A similar scene played out in a park near a New York courthouse, where counter-protesters sounded air-horns and banged pots and pans in an effort to silence an anti-Shariah rally. In St. Paul, Minnesota, state troopers arrested about a half-dozen people when scuffles broke out at the close of competing demonstrations at the state Capitol.

"The theme of today is drowning out racism," said New York counter-protester Tony Murphy, standing next to demonstrators with colorful earplugs. "The more racists get a platform, the more people get attacked."

On the steps of the Pennsylvania state capitol in Harrisburg, barricades and a heavy police presence, including officers mounted on horses, separated about 60 anti-Sharia demonstrators from an equal number of counter-protesters. Many of the latter were dressed in black masks and hoods and chanting "No Trump, no KKK, no Fascist USA."

The rallies, held in more than two dozen U.S. cities, were organized by ACT for America, which claims Islamic law is incompatible with Western democracy. ACT for America, a self-described grassroots organization focusing on national security.

The organization said it opposes discrimination and supports the rights of those subject to Shariah. However, the Southern Poverty Law Center, which tracks hate groups, calls it the largest American anti-Muslim group.

"We need unity in this country under no ideology and no banner except the Constitution of the United States of America," he added.

But the overwhelming majority of Muslims do not want to replace U.S. law with Islamic law, known as Shariah, said Liyakat Takim, a professor of Islamic studies at McMaster University in the Canadian city of Hamilton, Ontario.

Shariah, Takim said, refers to guidelines or principles — how Muslims should live. "Fiqh" refers to jurisprudence, or specific laws. The values embedded in Shariah do not change and are shared among Muslims, he said, while fiqh is open to interpretation and change, and in fact differs among Islamic sects and communities.

"The Quran allows slavery. So does the Old Testament. That doesn't mean we allow it today, too," Takim said. "Laws are amenable to change."

In Seattle, activists set up an "Ask an American Muslim" booth to give rally participants on either side a chance to speak with a Muslim.

"American Muslims support the American values and freedoms we all cherish," said Arsalan Bukhari, executive director of the state chapter of the Council on American-Islamic Relations.

The marches come amid a rise in reports of anti-Muslim incidents in the U.S., including arson attacks and vandalism at mosques, harassment of women wearing Muslim head coverings and bullying of Muslim schoolchildren.