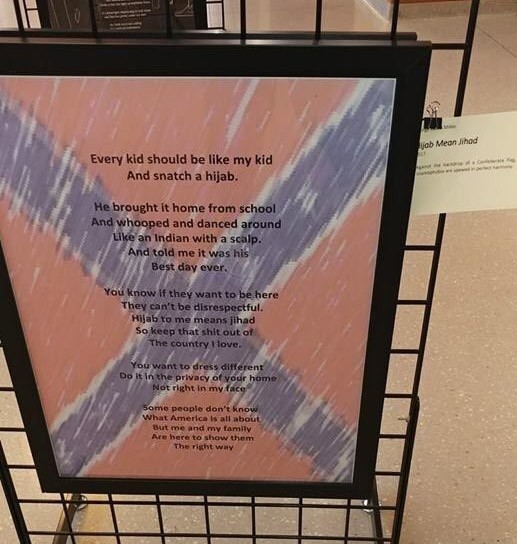 A public library in the U.S. state of Illinois has received harsh criticism on social media after exhibiting on Saturday an Islamophobic poem written on a Confederate flag background that insults Muslim women.

The poem, written by Professor George Miller, chair of the philosophy department at Lewis University, says "Hijab to me means jihad, so keep that s*** out of the country I love," in addition to several other lines disrespecting Islam.

"Is this really on display there?" a baffled Twitter user commented on a post criticizing the exhibit. "Not only is this on display, it's in the front lobby," the poster responded.

I firmly believe libraries should be a safe and free space for the exploration of challenging ideas, but putting up hate speech and calling it "art" is fuckin disgraceful, @AuroraPublicLib. pic.twitter.com/BRIOYxk6Wp

The public library of Aurora, Illinois, decided to take down the poem promoting hate speech after initially resisting the harsh feedback from hundreds of users on Twitter and Facebook.

"We are pleased that people are talking," an initial Facebook post of the library said, describing the criticism as "good discourse." 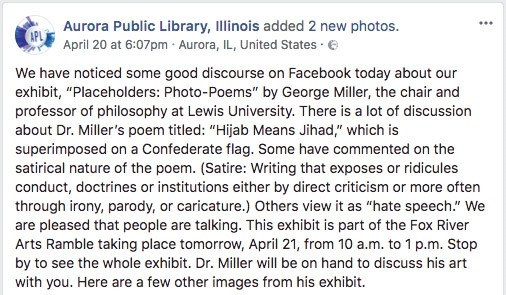 A person who did not identify their name shared a written complaint sent to the library, asking how it can be justified to display the hateful poem at the entrance of the library.

A library manager responded to the complaint in defense of the poem, and said it was approved within the framework of the library's policies of free speech.

"We invite all to come, see and contemplate this exhibit. Then, use it as a learning experience," the library employee wrote in the email.

A few hours after the initial Facebook post regarding the poem, the library announced that the panel would be taken down within a day. 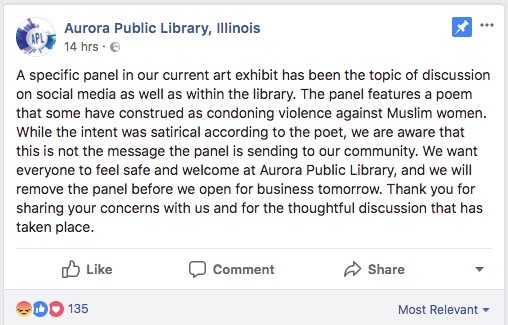 Documenting the anti-Muslim hate crimes in the U.S., a report published by the Council on American-Islamic Relations (CAIR) in 2017 suggests that "the number of hate crimes in the first half of 2017 spiked 91 percent compared to the same period in 2016," which was the worst year since 2013, the year CAIR began to document incidents in a new system.

According to the report, "the number of bias incidents in 2017 also increased by 24 percent compared to the first half of 2016."

"The most prevalent trigger of anti-Muslim bias incidents in 2017 remains the victim's ethnicity or national origin, accounting for 32 percent of the total. Twenty percent of incidents occurred because of an individual being perceived as Muslim. A Muslim woman's headscarf was a trigger in 15 percent of incidents," the report also indicates.