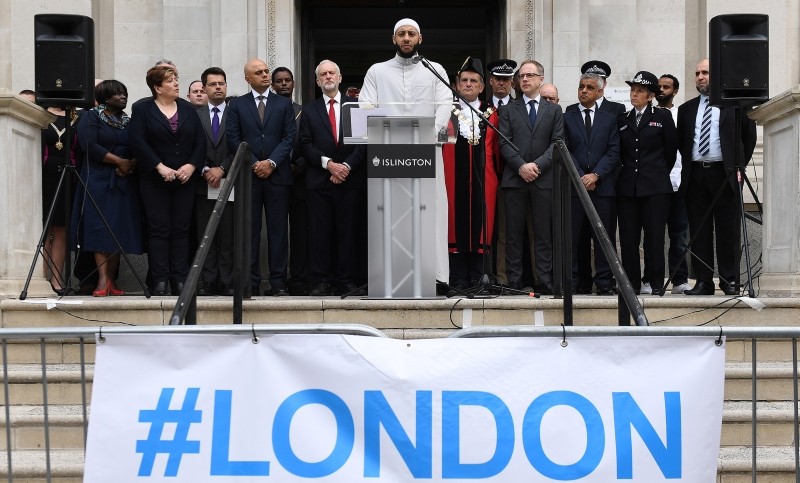 Imam Mohammed Mahmoud, center, speaks during a service to mark the first anniversary of the Finsbury Park terror attack, in London, U.K., June 19, 2018. (EPA Photo)
by Compiled from Wire Services Jan 23, 2019 1:37 am

Survivors of an attack near a London mosque have been invited to gather for a moment of silence to remember the victim and others hurt when a man drove his van into a crowd leaving evening prayers during Ramadan.

The minute's silence was held in memory of father-of-six Makram Ali, and for a dozen other people injured a year ago Tuesday.

In a statement, Prime Minister Theresa May vowed that "vile extremism" will not divide the nation.

"Last year's cowardly attack which targeted innocent worshippers leaving Finsbury Park mosque is an attack on all of us," May said.

London mayor Sadiq Khan was joined by the opposition Labour leader Jeremy Corbyn and interior minister Sajid Javid and figures from the local community for a minute's silence outside Islington Town Hall.

"It's a time to support and pray for the victims," said Toufik Kacimi, the chief executive of the Muslim Welfare House whose worshippers were targeted in the attack.

"It's also a time to reflect on the outstanding response from the community. We believe the terrorists will never win and this is shared by the British people of this country as seen by their messages of peace, love and tranquility."

The Muslim Council of Britain said it had "long spoken out about the worrying scale of Islamophobia," highlighting incidents in the past year such as arson attacks on mosques, a call by right-wing activists for a "punish a Muslim day" and the sending of letters containing white powder to many Muslims, including several lawmakers.

"This only touches the surface of a worrying new array of other hate crimes against Muslims in the past year," the group said.

The attacker, Darren Osborne, 48, was sentenced earlier this year to life in prison with no chance of parole for 43 years for murder and attempted murder for the attack targeting Muslims in London's Finsbury Park neighborhood.

In sentencing earlier this year, Judge Bobbie Cheema-Grubb said Osborne's mind was "poisoned" by far-right ideas before the June 2017 attack targeting Muslims and that he showed no signs of remorse.