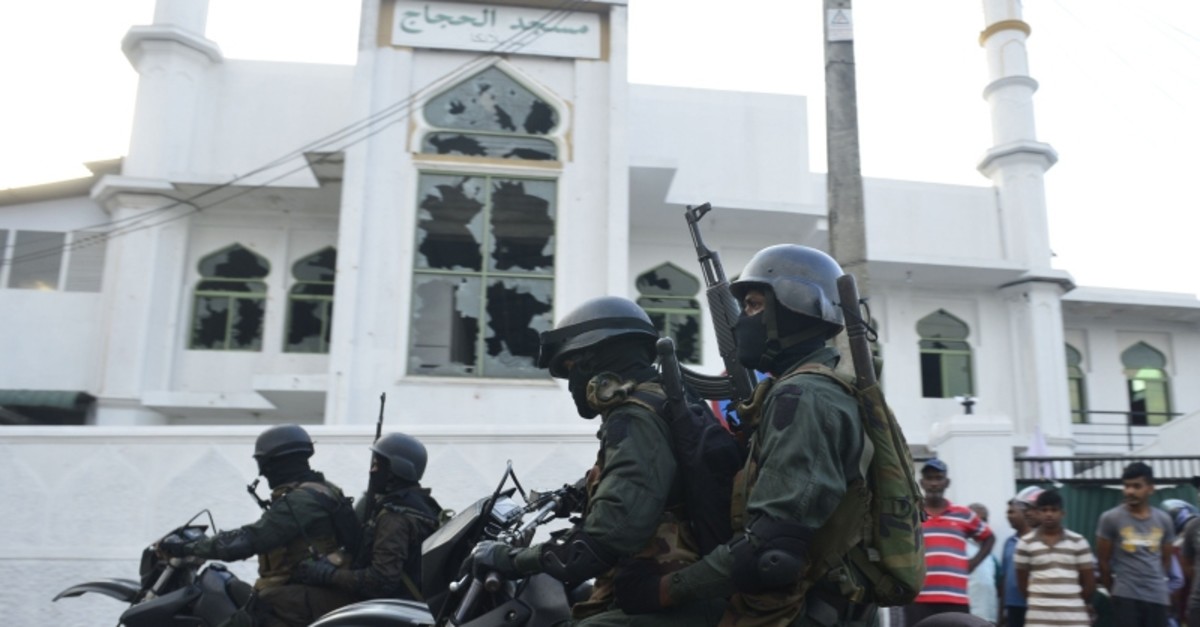 Heavily-armed Sri Lankan soldiers ride a motorcycle in front of the Jumha Mosque after a mob attack in Minuwangida on May 14, 2019. (AFP Photo)
by Compiled from Wire Services May 14, 2019 11:29 am

A mob in Sri Lanka's Puttalam district killed a Muslim man on Monday amid anti-Muslim rioting.

A 45-year-old Muslim man was slaughtered in his carpentry shop by a crowd carrying swords, a police official told local media Monday. He died soon after being admitted to a hospital, the official added.

The mob attacked mosques and burned Qurans in violence targeting Muslims for the Easter bombings.

A group of about a dozen people had arrived in taxis and attacked Muslim-owned stores with stones just after midday on Monday, they said, with the mob soon swelling to 200, and then 1,000. Besides the main mosque, the mob attacked 17 Muslim-owned businesses and 50 homes, witnesses said. Abdul Bari, 48, told Reuters his small brick shop had been burned down with a gas bomb.

"The attackers were on motorbikes, armed with rods and swords," he added. Others blamed the police for failing to disperse the crowd.

Sri Lankan soldiers in armored vehicles yesterday patrolled towns hit by sectarian violence this week as residents recalled how Muslims had hidden in paddy fields to escape mobs attacking their homes and shops. Authorities said the situation in the worst-affected northwestern parts of the Indian Ocean island nation was under control after anti-Muslim mobs appeared to have moved from town to town starting on Sunday.

Tensions have been running high in the Buddhist-majority Indian Ocean island nation since the April 21 attacks by seven suicide bombers who struck two Catholic and one Protestant church and three luxury hotels. Daesh terror group claimed responsibility for the attacks, carried out by a local terrorist group.

Sri Lanka has a dark history of communal tensions. For more than a quarter century it was embroiled in civil war as Tamil Tiger rebels fought to create an independent state for or ethnic minority Tamils. When the conflict ended 10 years ago the U.N.'s conservative estimates said about 100,000 people had been killed.

Sri Lanka's Muslims make up about 9% of its population of 21 million people and mostly live in the east and center of the island. Mosques and Muslim-owned properties in the country have been widely attacked, especially by Sinhalese Buddhists. Some Buddhist nationalists have protested against the presence in Sri Lanka of Muslim Rohingya asylum-seekers from mostly Buddhist Myanmar, where Buddhist nationalism has also been on the rise.

Two United Nations advisers warned that the latest attacks against Muslims if could escalate further if not stopped immediately.

"The country is trying to move forward from a traumatic period of inter-ethnic armed conflict, but these attacks are pushing Sri Lanka backward. If not adequately dealt with, the recent violence has the potential to escalate even further," the advisers said in a statement.

Muslim communities across the world have suffered numerous hate attacks over the past years with many blaming the surge on anti-Muslim discourse in the media and supported by the politicians. The Christchurch, New Zealand mosque terror attacks became the latest example of growing far-right terrorism, a well-known global threat. Extremist politics, including extreme nationalist and white supremacist politics that appear to be at the core of the latest terror attack on Muslims in New Zealand, have been part of daily politics for a long time. The rise of global extremism, with the flourishing of the right in Europe and U.S. President Donald Trump and the alt-right in America, has emboldened potential terrorists.