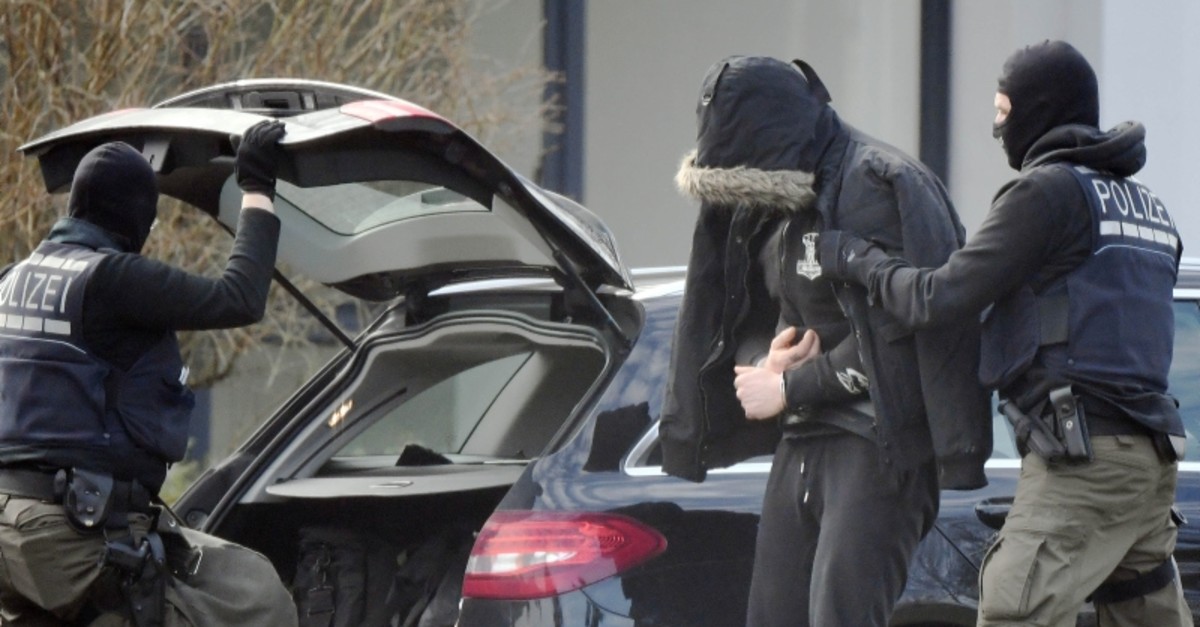 Photo shows police officers bringing a man believed to be one of the 12 men arrested a day earlier in a nationwide probe into an extreme-right group at the Federal Supreme Court in Karlsruhe, southern Germany on Feb.15, 2020. (AFP Photo)
by Daily Sabah
Feb 17, 2020 12:25 pm

Twelve suspects, all German citizens, were detained during a raid on the group.

According to the German-language daily Spiegel, the police found several guns and one so-called slam gun, which the terrorists built themselves. Other media outlets reported that the police also recovered grenades and Nazi insignia.

The group was reportedly inspired by the gruesome attacks in New Zealand's Christchurch, where 51 people were massacred by a far-right terrorist.

The terrorists wanted to target people praying in the mosques in commando-style attacks. The group is associated with the international right-wing "Soldiers of Odin" and aimed to incite "counterattacks" that would, in turn, cause a "civil war-like" situation in Germany, the Federal Prosecutor's Office said in a statement.

Their end goal was to "shake and ultimately overcome the state and social order of the Federal Republic," the statement read.

The German police have been on the tails of the terrorists for months and monitored the secret meetings of the group, where the selection of the mosques was discussed and the duties of obtaining the weapons were given to some of the members.

According to the German daily Bild, the police were able to infiltrate the group with a mole. Apart from the face-to-face meetings, the group was in contact through several messaging apps.