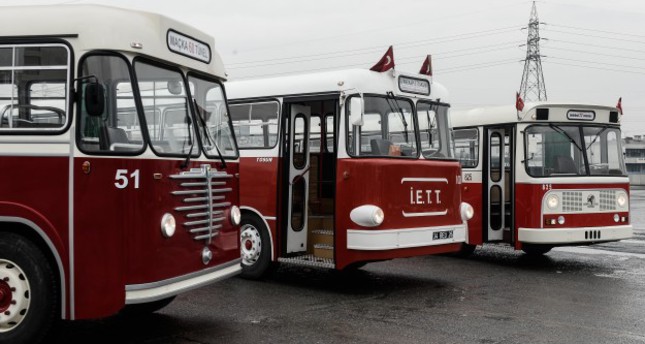 by AA Dec 25, 2014 12:00 am
Bussing, Leyland and Renault-Scemia – they were all the witnesses to Istanbul's 20th century evolution from small city to metropolis – and now they are coming back.

Aiming to draw both Istanbulites and international travellers, the Istanbul Electric Tram and Tunnel Company has replicated the city's veteran buses which will come into operation in 2015.

Stating that they reproduced the buses – Leyland, Bussing and Renault-Scemia – in eight months with the help of a team of 85 people, Sever adds: "After Tosun – Turkey's first domestically manufactured trolleybus – these three buses will hit Istanbul roads for the first time in decades."

"Tosun has drawn great attention. I am sure those buses will attract more," Sever adds.

Istanbul has nearly a century of history with these buses. According to the IETT, the first buses were purchased from France and arrived in Istanbul in 1926, only three years after the Turkish War of Independence.

The first four buses were Renault-Scemia and started by assisting the Tramway Company which had been in operation in Istanbul since 1871.

"Renault-Scemia is one of the three replicated buses. Had having a seat capacity of 28 passengers, Renault Scemia-labeled buses operated in Istanbul until 1942," says Sever.

The first four Renault-Scemia buses firstly serviced hilly districts in Istanbul where it was harder for tramways reach, the IETT says.

One of four buses started to service the Beyazit-Taksim route in 1927 and the other three later started to operate on Beyazit-Bakircilar-Fuatpasa-Mercan-Fincancilar-Sultanhamam-Eski Postane (Old Post office)-Eminonu route which later extended to Karakoy.

The second of these nostalgic buses is the Bussing-labeled German fleet.

Having served for 30 years on Istanbul roads, Bussing buses had a seating capacity of more than 50 passengers – 25 sitting and 26 standing – for the city's growing population.

Later, around 300 Leyland-labeled buses were manufactured specially for Turkey in 1968: "The British Leyland buses, well-known for being long-lived and safe, provided comfortable bus rides to Istanbulites until 1992," says Sever.

The pace of change in Turkey's largest city has often dictated transport policy.

"You cannot compare the population of those times with today. It was just over 2 million people back then but now it exceeds 15 million" says 72-year-old Istanbulite Zarife Guldemir.

Born and raised in Istanbul's Uskudar district on the Asian shore of the Bosphorus, Guldemir is one of the passengers who rode the Bussing and Leyland vehicles.

Guldemir says she clearly remembers the classic vehicles: "When we wanted to walk in Taksim or Beyazit we used to use those buses. The city was at peace and the small number of buses and the tramway were enough for Istanbulites in the 70s."

She adds: "But now, even though we are surrounded by a transportation network, it still not enough to solve Istanbul's traffic problem, but the nostalgic buses can remind me of the peaceful days of Istanbul before I die."

Istanbul is the second-worst European city after Moscow in terms of traffic congestion, according to 2012 data from European navigation systems company, TomTom.

According to IETT figures, Istanbul offers public transport services to more than 3.5 million passengers every day. Around one million people are carried via nine different urban railway lines.

"As IETT, we just wanted to revive the nostalgic days of Istanbul by manufacturing these buses" says Sever, indicating that the buses alone cannot solve the city's traffic problem.

Pointing out that the buses will play passengers nostalgic songs during their journeys, Sever adds, "Those who travel by these buses will take a trip down memory lane."