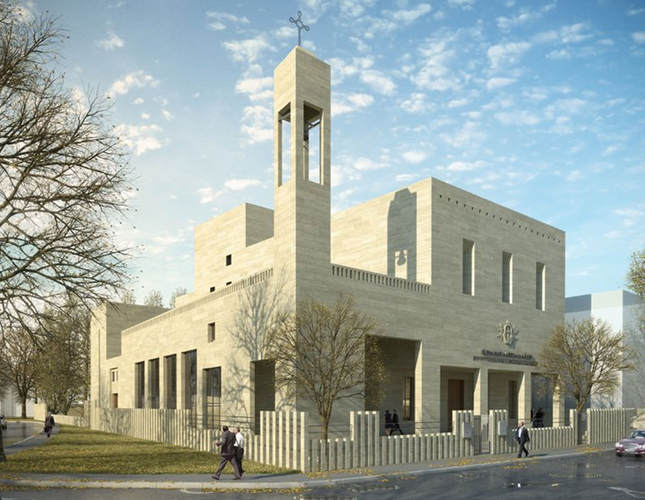 by Daily Sabah Jan 02, 2015 12:00 am
The government will permit one of Turkey's Christian communities to build a church, the first such house of worship to be built completely from scratch in the Republican Era. According to Vatan newspaper's Emre Eser, the church will be built in the Yeşilköy district of Istanbul with funds provided by the Mardin Syriac community.

The Virgin Mary Syriac Church will cost $1.5 million, and according to sources from the Prime Ministry who spoke with Anadolu Agency (AA), the decision to approve the building of the church was made during the luncheon Prime Minister Ahmet Davutoğlu held with minority leaders on Friday at Dolmabahçe Palace in Istanbul. There are 25,000 Syriac Christians in Turkey, 18,000 of whom live in Istanbul, and the church will be built within the confines of the Catholic Cemetery in Yeşilköy.

One of the oldest Christian denominations, Syriac Christians use a language related to the ancient Aramaic of Jesus Christ in their liturgy.

The project for the church has been ongoing since 2013 and building plans were completed by architecture company Ergün Mimarlık, which sent a delegation to Mardin to assess the special Syriac architecture.

According to AA, Davutoğlu listened to the grievances aired by the representatives of minorities during the luncheon. When the turn came for the Syriac Metropolitan in Ankara and Istanbul, Yusuf Çetin, Davutoğlu said, "I know what you want. Let me tell you before you say it. We will take the necessary steps to resolve the church problem."

The Istanbul Metropolitan Municipality allocated the Catholic Cemetery, located on Yeşil Zeytin Street, to the Syriac community. The land allocated to the church includes ancient tombs, and the church building necessitates approval by the Monuments Board.

The project includes three subterranean floors, two of which will be allocated to parking. Additionally, the church will have three floors above ground.

According to sources from the Prime Ministry, the representatives of the minority communities shared the problems faced by their people in the past during the luncheon and thanked the prime minister for the progress that has been made in the past decade.

Davutoğlu said that when some state officials mentioned minority communities, they talk about them as if these citizens were linked to foreign countries. "Everyone who is sitting around this table is an equal citizen of the Republic of Turkey," he said.