24/7 library open for book lovers in Istanbul, the city that never sleeps 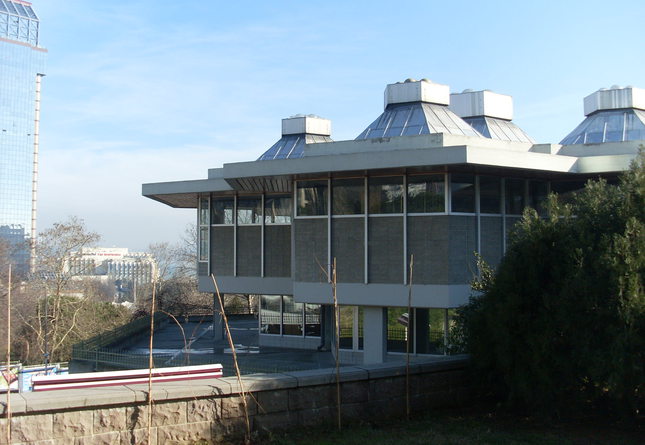 by AA Jan 06, 2015 12:00 am
Istanbul - a city that never sleeps - boasts Turkey's first and only 24/7 open public library which attracts some bibliophiles visiting in the run-up to midnight who travel almost 60 kilometers.

One of the first reference centers of Turkey's republican era, Istanbul's Atatürk Library, has offered a 7/24 service since last October, leading to a huge rise in visitors.

The unusual, three-floor hexagonal building was designed in the 1970s by Turkey's award-winning architect Sedad Hakkı Eldem who had an important influence on the country's national style.

It is located in Taksim - the heart of the 15 million-strong-city - and only minutes' walk away from teeming nightclubs, bars and cafes.
A casual visitor to the library at 10.00 p.m. might be surprised to see the size of the midweek crowd.

It is late Tuesday and some people are just chatting in the garden; others are studying and some are reading a book, pausing occasionally to look at the breathtaking Istanbul view outside.

One regular is 31-year-old bank employee Müslüm Kayabaş who has been studying at the library almost every day for the last three months.

Cramming for a management position exam, Kayabaş says he has stayed over at the library several times.

"One day at around 5:00 in the morning I wasn't really feeling well; I remember sheltering near the heating just like a cat," he says, smiling.

Kayabaş works at the library until 12:45 a.m. as the last bus home stops at that time.

The city decided to open the library 24/7 due to intense demand from readers like Kayabaş, says deputy manager of Istanbul Municipality's Library and Museums Department, Ramazan Elmas.

According to Elmas, around 600 people visit the library every day, with this figure increasing by 25 percent since October since opening 24/7.

Apart from some university libraries open during the exam terms, many Istanbulites have to travel long distances to study or conduct research.

"Some of our readers are coming from Buyukcekmece (55 km to Taksim) or Kartal (30 km) as there are no 24/7 libraries in their neighborhoods," Elmas says.

Istanbul Municipality has 18 libraries across the city and two new reference centers will be opening this year, he adds.

Turkish libraries have a history of more than a century, according to assistant professor of information and document management from Istanbul University, Isil Ilknur Sert.

"Turkey's first library was Beyazit State Library, which was formed by Sultan Abdulhamid II in 1884 in the Islamic-Ottoman social complex of Beyazid," Sert says.

Istanbul's first municipal library was formed in 1924 in the same complex and moved during the 1960s as a result of lack of space after the library extended its collection.

Today Atatürk Library is located at a building constructed by Turkey's largest conglomerate Koç Holding for the 50th anniversary of the republic in 1973.

At the start the library had around 170,000 publications, mainly donated by some of Turkey's top intellectuals of the time.

Today the library has around 500,000 publications, including books, antique writings, maps, postcards and one of Turkey's largest newspaper and magazine collections.

Sert believes Ataturk Library's decision to open 24/7 will be followed by some of the 1,200 state libraries across Turkey.

Another bookworm at the library is Ahmet Menteş, a 23-year-old law student from Istanbul's Beykent University.

Mentes comes to the library daily during his final exam term; he almost lives there, spending around 12-13 hours on the premises each day.

"Most of the time I sit up all night. Sometimes I go home at around 4:00 in the morning," Menteş says.

It seems Turkey's cultural capital will continue to draw thousands of night owls but as much now for its intellectual offerings as its colorful nightlife.