Seven not so common reasons for visiting Istanbul 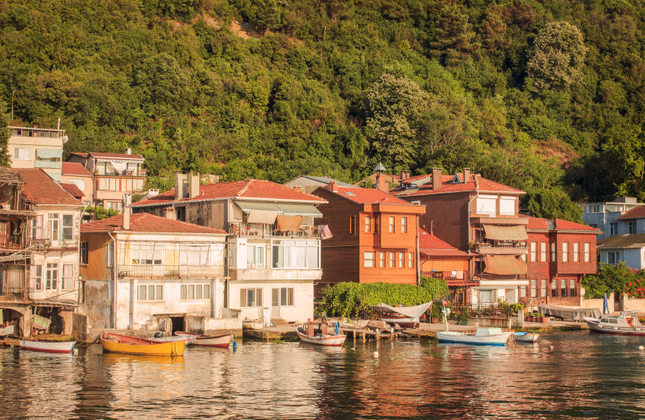 Its vibrant historic and cultural mosaics, which embody the best of both Eastern and the Western traditions, have made Istanbul an essential place on must-visit lists. Aside from the popular spots, such as the Blue Mosque, Topkapı Palace and Hagia Sophia, Istanbul offers a unique and exotic flavor by blending the city’s vast historical and cultural heritage with a modern and hip touch.

Have a Turkish breakfast

Breakfast in Turkey (known as kahvaltı) is an essential part of a typical day and the culture. It is not simply having some bacon or sausage with eggs and toast, cereal or a quick coffee of questionable quality. Breakfast in Turkey is like a feast, a king of breakfasts. What is for breakfast in Turkey? Simply put, a lot. Typically, you will be served a few types of cheese, jams, börek (a type of pastry), olives, yogurt, honey with cream, eggs (boiled or scrambled with sujuk, a type of sausage), a fresh salad of cucumbers and tomatoes and of course the non-negotiable freshly brewed Turkish tea. If you manage to eat all that is served, you might be full for the rest of the day. Many small restaurants around the city offer all-day breakfast, so it will be easy for you to find.

Take a walk around Cihangir

Cihangir, located in Beyoğlu, is one of the must-see areas in Istanbul, especially for cafe and restaurant lovers. Although it is known for its posh atmosphere, its bohemian flavor has overcome this, making it an artsy and vintage district mixed with aristocratic chic. The neighborhood's colorful 19th century apartment buildings and vintage boutiques combine both traditional and contemporary international restaurants with eclectic decors.

Galata is undoubtedly one of the most colorful parts of the city. Located in Beyoğlu, between Karaköy and the famous İstiklal Avenue, Galata traditionally housed minorities such as Jews, Greeks and Armenians as well as merchants during Ottoman times. Today, it has become a hot spot of bohemian artists, musicians and cafe lovers. Its eclectic history and atmosphere makes a walk around here feel like a walk through history. Galata offers a wide range of vintage art shops, music stores and handmade crafts as well. For those who are into jazz, you will find unique cafes and bars with live music in the area. Galata is also the home of Galata Tower, which was allegedly built during the reign of Byzantine Emperor Justinian I in 507 A.D. Galata Tower has been used for various reasons throughout history, ranging from a prison to a watchtower for fires.

However, now it is open as a tourist attraction where you can take great panoramic photos on its balcony and have a meal at the restaurant on its seventh floor. Other places you should visit around the area include SALT Galata, an art space and library in a renovated 1890 bank, and the Galata Mevlevi Lodge, which was previously used by dervishes for Sufi rituals and is now used as a museum of Mevlevi culture. Here you can watch a dance of whirling dervishes, which were mentioned in the poetry of the 13th century philosopher Mevlana Jalaluddin Rumi. There are also many churches and small mosques that were built centuries ago in this area.

Balat
Balat, located in Fatih, is one of the historic residential neighborhoods in old Istanbul situated on the historic peninsula. It has become popular in recent years for those that want to avoid the typical Istanbul scenery and take some great photos of old, colorful historic buildings. Balat, which also housed non-Muslim minorities during the Ottoman era, particularly Jews, is one of the few districts that has not lost its authentic neighborhood feeling. Lying right above the Golden Horn, it is a perfect spot for those that want to escape the "chaotic harmony" of Istanbul's modern life and sample local flavors at its traditional eateries and coffeehouses in a historical setting of many synagogues and churches.

The old book bazaar is named after its function, since "Sahaflar" means "pages" or "bookseller" in Ottoman Turkish and "çarşısı" means market. It is located near the historical Beyazıt Mosque and the Beyazıt gate of the Grand Bazaar and houses small shops that carry a vast range of old and new books covering various topics in multiple languages. Sahaflar Çarşısı is unique for its collection of shops that offer beautiful Ottoman calligraphy, manuscripts, Arabic, Persian and Ottoman inscriptions and other examples of Ottoman and regional arts. The charming market is not only a center for old booksellers, but it is also a place used by the like-minded intelligentsia and booklovers of Istanbul to meet and sip tea.

If you are traveling to Istanbul, you will most likely be tempted to take a Bosporus tour from the many tour guides attempting to sell you tickets for boats docked in Eminönü that will give you a tour of the Bosporus. However, an alternative and a cheaper way to take a Bosporus tour is to take a ferry at Eminönü from the Boğaz Hattı dock (Dock No. 3), as it stops at a number of places along the way and concludes at Anadolu Kavağı where you can have a seafood lunch at one of the traditional seafood restaurants.

The ferry is a great way to see the beautiful and historic mansions alongside the water while taking a sip of fresh orange juice, tea and other drinks. While traveling along the Anatolian side, the boat crews occasionally bring aboard fresh yogurt from Kanlica, a district historically known for its yogurt served with powder sugar or honey.

The ferry also stops at districts such as Beşiktaş, which houses Çırağan Palace and Dolmabahçe Palace as well as many lovely cafes and restaurants, and Anadoluhisari, a small historic neighborhood that houses a fortress built by the Ottomans. Some of the ferries also stop at Kuzguncuk, a small, historic neighborhood with streets lined with many wooden Ottoman houses and small coffee and teahouses. It has also been a home for the non-Muslim minorities, especially Jews, since Ottoman times – hence the old synagogues and churches. Bebek is another trendy and upscale neighborhood located on the European side of the Bosporus. It was known as a hot spot for summerhouses of Ottoman aristocrats and remains one of the posh residential areas with unique Ottoman architecture. If you want to go for a rather quiet walk along the Bosporus, Bebek is your spot, especially on a nice summer afternoon so you can end your walk at a waterfront cafe.

Moda, a quiet neighborhood just south of the energetic Asian side hub of Kadıköy, is one of the few places in Istanbul where you can enjoy a quiet afternoon. Located on a peninsula between the lower Bosporus, Marmara Sea and Kalamış Cove, Moda's coastline offers some of the best angles to enjoy Istanbul's landscape, while the tip and western coast of the peninsula overlooking the historic peninsula on the European side has one of the best views of the sunset in the city. The neighborhood is famous for its open teahouses and waffle and ice cream shops, as well as some of Istanbul's best "meyhanes," traditional mezze restaurants serving Mediterranean cuisine. If the weather is nice, you can also simply hang out on the seaside where you can often find an amateur band jamming.

Streets between central Kadıköy and Moda emerged as an alternative center for Istanbul's entertainment life during the 1990s, when Taksim – known by many as Istanbul's heart for entertainment – began suffering systemic failures due to overcrowding and banality as described by many at the time. The boom was specifically realized in Kadıköy's restaurants and pubs that play rock and alternative music, which the district has been famous for since the 1950s. In this sense, Kadife Street – dubbed the Bar Street of Kadıköy – and Moda Street are the area's hotspots. You will also find numerous cafes in the form of artist workshops in the district.

The most famous landmark in the district is Süreyya Opera House, which replaced the Atatürk Cultural Center, the city's main opera scene, in 2007. The building was originally established in 1927 as the first musical theater on the Anatolian part of Istanbul, but due to lack of appropriate facilities and equipment, operas were never performed at the center until it underwent a functional restoration. Other neighborhood landmarks include the Rexx Movie Theater and the Barış Manço Museum. A one-way nostalgic tramline that runs between Kadıköy and Moda is another must-see in the district.