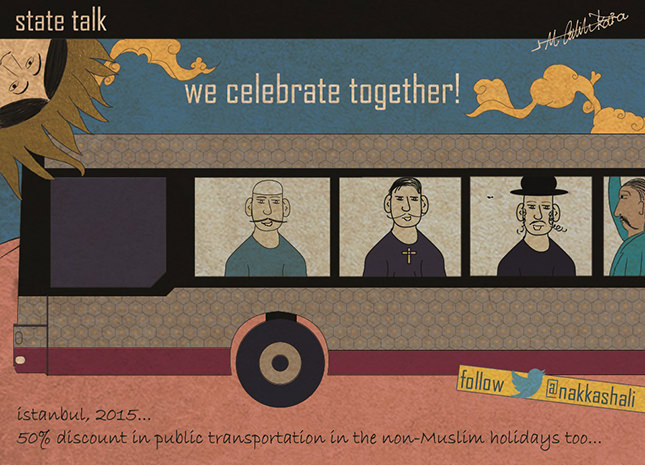 by Yusuf Ziya Durmuş Jan 14, 2015 12:00 am
The Istanbul Metropolitan Municipality is mulling discounting public transportation for non-Muslim religious holidays since the municipality council unanimously adopted a bill on the matter.

If the mayor's office ratifies the decision, Istanbul residents will enjoy discounts on mass transit, which includes the metro system, public buses and ferries traversing the Bosporus, on Jewish and Christian holidays like they do on Muslim holidays. Since passengers are not asked to show any document to prove their faith, it means Muslim passengers will also benefit from a discount of up to 50 percent in transportation fees as well.

Tarık Balyalı, one of the council members who proposed the bill, told an assembly of the municipality council that Istanbul has been home to various faith communities throughout its history, including Muslims, Christians and followers of Judaism as well as other religious groups and these faiths coexisted and enriched Istanbul's culture. Balyalı said a considerable number of non-Muslim citizens live in Istanbul and the municipality should provide 50 percent discounts to them on their holidays.

The bill calls for discounts on Christmas, Easter, Rosh Hashanah and Yom Kippur on all mass transit vehicles operated by the municipality. These include public buses, metro and ferry service between the Asian and European sides of the city as well as metro-buses.

Currently, the Istanbul municipality provides a discount during annual Muslim holidays Eid al-Adha (Festival of Sacrifice) and Eid al-Fitr (Festival of Ramadan). The bill comes one month after a Turkish-Armenian journalist took on the municipality authority overseeing public transportation in the social media and asked them if they considered offering free passes on Christmas Day on public transportation as they did on Muslim holidays.

Istanbul is one of the few Turkish cities with a sizeable non-Muslim community. However, exact figures regarding their population are not available due to the lack of an official survey of their population. Greeks, Jews and Armenians who trace their origins back to Ottoman times and before make up a majority of the minority population in the city.

The proposal to discount transportation on non-Muslim holidays comes on the heels of another affirmative action for minorities. The municipality of the Maltepe district on Istanbul's Asian side declared December 24-25 last year as an official Christmas holiday for any member of its employees wishing to take two days off to observe the Christian holiday.

Non-Muslim minorities were victims of discrimination in Turkey in the 20th century. A series of policies ranging from a wealth tax targeting rich members of non-Muslim communities, a pogrom and mass deportation in the 1950s and 1960s forced many to leave the country. Today, the government aims to eradicate the negative view of the state among minorities by new steps such as the return of properties forcibly seized from those communities.