Istanbul, Marmara grind to a halt due to strong winds 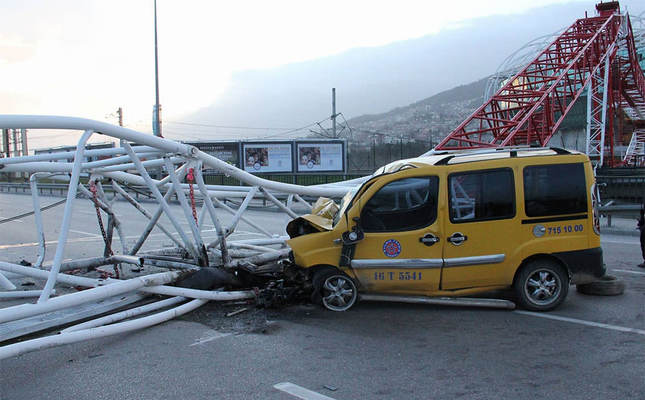 Strong southwesterly winds uprooted trees and caused much distruption in and around Istanbul over the weekend. Officials say that winds will continue to batter the entire region for the next few days

Strong winds in Istanbul toppled trees, caused roofs to blow off, forced cancelation of flights and public transportation and killed at least one person over the weekend.

The Southwesterly winds, or Lodos, as it is called in Turkey, are a regular occurrence during winter months affecting the Marmara region of Turkey. Over the weekend, winds reached speeds of up to 90 kilometers per hour.

The Istanbul Sea Buses Ltd. (İDO) announced yesterday that some ferry routes within Istanbul and several larger commuter ships traveling to other provinces were cancelled due to strong winds. Strong winds are expected to cause delays and cancellation of ferries today too. Cargo ships traveling through the Bosporus and Çanakkale Straits were ordered to wait. Fishing boats also had to shelter at various harbors throughout the region. Ferries traveling to Gökçeada and Bozcaada, in the Aegean Sea, were also cancelled.

Officials from the Meteorology Department warned that strong winds were expected to continue for the next few days in Marmara and the coastal Aegean regions.

Turkish Airlines canceled a total of 229 flights, calling on passengers to call the 444 0 849 hotline to before traveling to Istanbul's airports to confirm the flight is on schedule. More cancelations are expected.

One dead in Bursa

Dozens of trees were uprooted and roofs were blown off in Bursa due to Lodos, with the driver of a taxi killed when a nearby crane toppled. Officials said dozens of cars were damaged due to falling trees. Similar scenes were seen in other provinces of Marmara, including Çanakkale, Tekirdağ, Bilecik, where local rivers burst their banks engulfing cars. Teams from the Prime Ministry Disaster & Emergency Management Presidency (AFAD) rescued several people from floods.