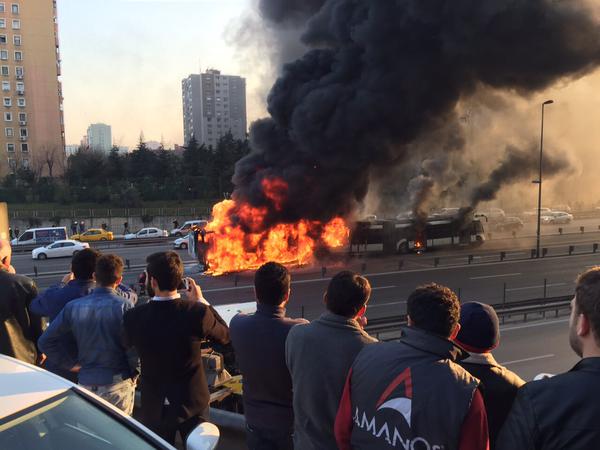 by Daily Sabah Mar 24, 2015 12:00 am
A Dutch-made metrobus has been destroyed as a result of a fire, caused by an alleged explosion while moving on the highway, in Istanbul on Tuesday afternoon, reports said.


The fire took place in Istanbul's Bahçelievler district, while the metrobus was en route to Avcılar district from Şirinevler district.

The passengers were evacuated immediatedly and no casualties have been reported, sources said. Firefighters from Istanbul's Fire Department have been deployed to put out the fire.

The metrobus routes have been closed both ways, but the Istanbul Metropolitan Municipality announced that they will resume normal operations once the bus is removed from the route.

Among the city's operating metrobuses, 50 are made by the Dutch brand Phileas, which were purchased for 1.2 million euros for each vehicle by the Istanbul's Metropolitan Municipality in 2009. The Istanbulites have had ongoing concerns related to buses, including the high price paid to purchase them and their insufficient durability.