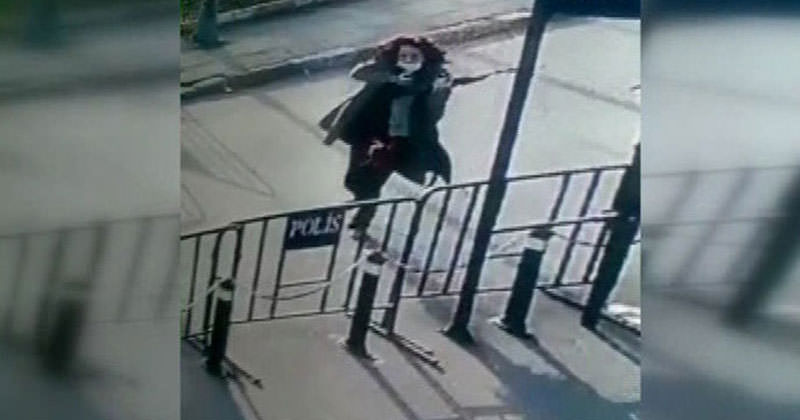 | Photo: DHA
by daily sabah Apr 02, 2015 12:00 am
New video footage showing the female terrorist responsible for attacking Istanbul's police headquarters on Vatan Avenue, emerged on Thursday, one day after the fatal attack. The female terrorist, who has been reported to be Elif Sultan Kalsen by several Turkish media outlets, can be seen firing at the police officers, before being gunned down herself.

On Wednesday, two terrorists attacked Istanbul's Police Headquarters with long barreled weapons, to whom the police fired back. One female assailant, who was believed to be a suicide bomber, was killed on the spot, while the other assailant fled the scene.

Two police officers are reported to be injured.

Following the attack, Istanbul Governor Vasip Şahin confirmed that two terrorists attacked the headquarters and that one of them was shot dead in exchange of fire with police and the other terrorist was injured.

A bomb disposal team arrived on the scene after three bombs, reportedly hand grenades, were found on the body of the female terrorist who had been shot dead. A controlled explosion was conducted by the team.

Several media outlets have reported that the female terrorist is Elif Sultan Kalsen. Kalsen was earlier claimed to have conducted the suicide attack against a police outpost in Istanbul's Sultanahmet district. Although DHKP-C had initially claimed the attack and said that it was conducted by Kalsen, it was later revealed that the attack was conducted by Diana Ramazova of Russian origin with possible links the self proclaimed Islamic State of Iraq and Sham (ISIS).

Kalsen was later associated with the attack on a police outpost in Istanbul's Taksim Square, however, as the female assailant had managed to escape, this claim could not be proven at the time.