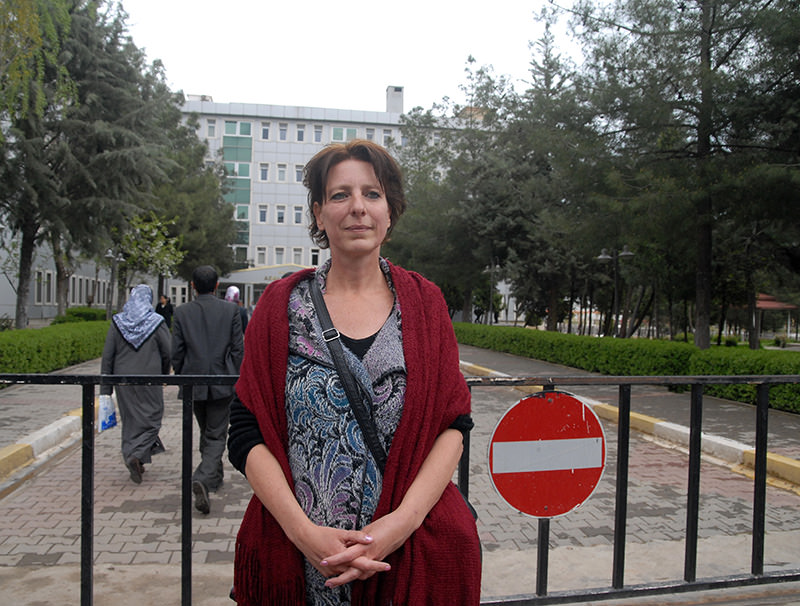 | AP Photo
by daily sabah Apr 13, 2015 12:00 am
A court in the southeastern city of Diyarbakır ruled yesterday for the acquittal of Dutch activist Frederike Geerdink on charges of spreading propaganda of the terrorist organization the PKK. The ruling comes about one week after a prosecutor asked for her acquittal. Geerdink, known for the staunchly pro-PKK articles she penned, was facing a prison term up to five years.

The activist attended the second hearing of her trial in Diyarbakır where she has a residence. The prosecutor reiterated his indictment and said there was no evidence of Geerdink actively carrying out pro-PKK propaganda such as "hanging any items, banners, emblems, pictures related to the terrorist organization in any place or wearing an uniform with PKK insignia," as was claimed. A panel of judges ordered her acquittal for the lack of evidence.

Speaking to journalists after her acquittal, Geerdink said she appreciated the ruling, adding, "it would be better if there was not a lawsuit (against me) at all."

Geerdink was released pending trial after the counterterrorism units of the Turkish National Police raided her home in the southeastern Turkish province of Diyarbakır and detained her on charges of spreading terrorist propaganda for the PKK in January.

The activist, who has been in Turkey since 2006, is known for her reports on Kurds and the PKK. She had penned an article titled, "A permanent cease-fire? Now? I'd be disappointed," one month before her detention, expressing frustration on the reconciliation process that the government launched to end the campaign of terror by the PKK. "And the topic that the media seem to get excited about is disarmament … Öcalan, after all, said a few days ago that a solution to the conflict could be reached within months. So, is he preparing for another ground-breaking speech at Nevruz? Will he declare a permanent cease-fire? I'd be disappointed if he did," she wrote, referring to the PKK's jailed leader's call for disarmament. Authorities have stated that her detention was due to a series of complaints over her alleged support for the terrorist organization.

Charges against Geerdink are based on her allegedly pro-PKK articles and an interview with senior PKK leader Cemil Bayık. She was accused of attempting to recruit militants for the terrorist organization.
Last Update: Apr 13, 2015 6:23 pm
RELATED TOPICS