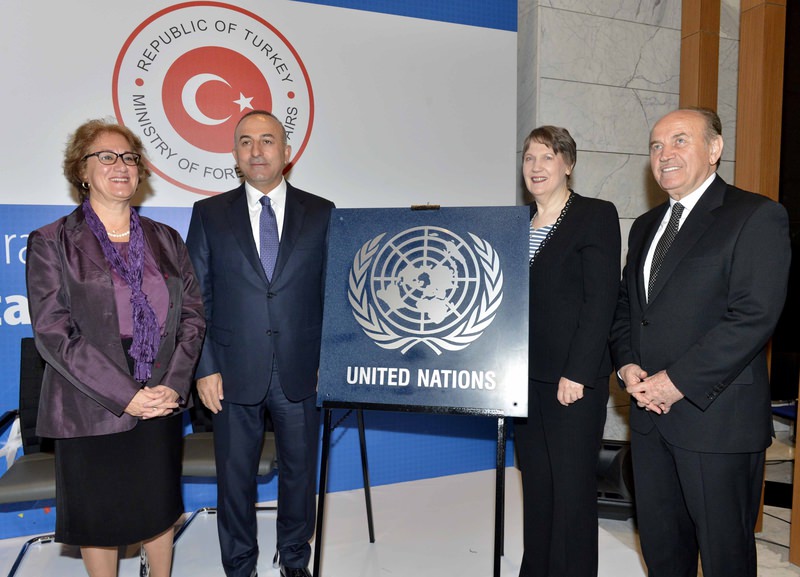 |AA Photo
by Sühem Özge Terece Apr 23, 2015 12:00 am
The United Nations and the Republic of Turkey officially launched the new Istanbul Regional Hub on Thursday which provides support to the countries and territories in which the UN Development Programme (UNDP) works in Europe and CIS (Commonwealth of Independent States).

The joint inauguration was held with the participation of Mevlüt Çavuşoğlu, Minister of Foreign Affairs of the Republic of Turkey, Helen Clark, the Chair of the United Nations Development Group and UNDP Administrator and Kadir Topbaş, Mayor of Istanbul.

Beginning her opening remarks by emphasizing the importance of April 23 for Turkey, Helen Clark expressed her pleasure in inaugurating a new Istanbul regional hub, which also hosts UNICEF and UN Women regional offices.

"By locating this knowledge and technical expertise in Istanbul, UNDP will be well positioned to support and engage with partners in Europe and CIS on the post-2015 development agenda, which is due to be agreed in September of this year," said Helen Clark.

She then thanked Turkish officials, particularly PM Davutoğlu, Foreign Minister Çavuşoğlu and the Mayor Topbaş, for their productive conversation and support to establish the regional hub.

Helen Clark stated her appreciation for Turkey's role as an emerging donor for development cooperation across the world and its efforts to defuse tension in the region. Clark said the hub in Istanbul was particularly important given the geographical significance of the city.

Clark also said that Turkey was already a core partner of UNDP and gave great support for global development issues.

Taking the floor after Clark, Foreign Minister Çavuşoğlu said that the new hub has various meanings for Turkish Foreign Ministry, "Above all, this hub is a reflection of our multidimensional foreign policy which prioritizes providing support to regional and international organizations. Turkey has played crucial roles in global development with many co-chairmanships with various countries, but we need to place emphasis on these issues more than ever considering current conflicts including merciless terrorist organizations, racism, Islamophobia and anti-Semitism."

Çavuşoğlu underlined that Turkey will keep on placing emphasis on initiatives relating to global development, and the fact that a UNDP office has been launched in Istanbul shows that Istanbul is becoming a regional center for the UN.

Çavuşoğlu emphasized that Turkey does not only support a certain region, but places equal emphasis on all continents ranging from Latin America to Africa. The Minister said that with this new hub, Turkey will carry out development projects actively with UNDP and the country will give both logistical and financial support to UNDP.

"We, as the Foreign Ministry and Istanbul Metropolitan Municipality, will give $3-million support to the UNDP Istanbul Hub per year in the next five years voluntarily to bring the projects into being."

Mayor Kadir Topbaş also underlined that every individual has a responsibility to establish peace amid current problems which are leaving millions in harsh conditions. Topbaş said the incidents do not only affect the region, but that the whole world is affected by human tragedies. The Mayor also emphasized the importance of local administrations in establishing peace.

"If local administrations are active and partners to a solution, it is easier to reach the target. We, as Istanbul Metropolitan Municipality, have come a long way in cooperation with the important institutions such as the UN and we would like to be involved in the process more actively," Topbaş said.

The Istanbul Regional Hub is co-located with other UN agencies, including the UN Population Fund, which will strengthen coordination within the UN development system. UNDP has other regional offices in Amman, Addis Ababa, Bangkok, Cairo, Dakar and Panama.
Last Update: Apr 23, 2015 3:19 pm
RELATED TOPICS