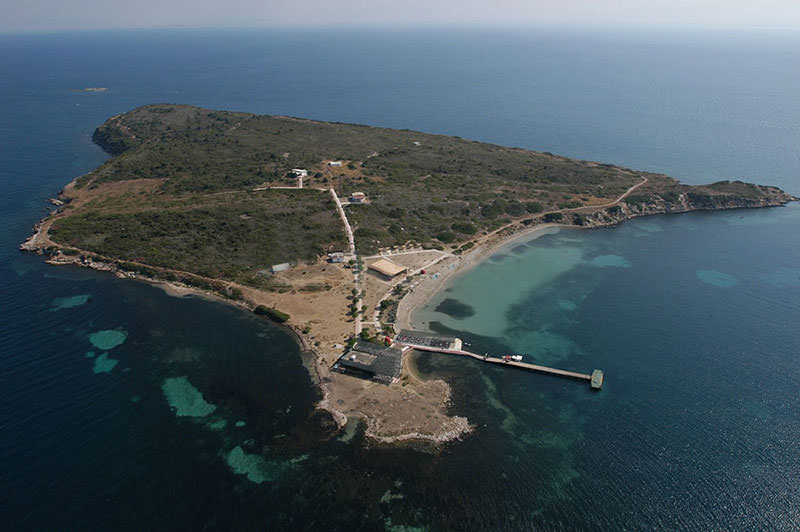 Prime Minister Davutoğlu inaugurated the building of the Freedom and Democracy complex on Yassıada, where military tribunals after the 1960 coup sentenced the country’s first democratically elected PM along with two of his ministers to death

The project to transform the island of Yassıada in the Marmara Sea into "the Freedom and Democracy Island" was inaugurated on Thursday at a ceremony attended by Prime Minister Ahmet Davutoğlu. The project was first initiated by President Recep Tayyip Erdoğan while he was serving as the prime minister.

Yassıada has become synonymous with the May 27, 1960 military coup, the first in Republican history, the trials of the leading politicians of the time and the execution of Prime Minister Adnan Menderes, Finance Minister Hasan Polatkan and Foreign Minister Fatin Rüştü Zorlu. The three executed politicians have been seen as martyrs of democracy ever since.

Menderes, the founder of the Democrat Party (DP) in 1945, which broke from the Republican People's Party (CHP) that had been governing the country as a single-party system since the founding of the Republic, and led it in the first multi-party elections in 1946. In the 1950 elections, the DP won a parliamentary majority and ran the country until the May 27, 1960 military coup. Menderes is seen as the first democratically-elected prime minister of the country. His term saw significant changes to counter the strict secularist policies of the preceding CHP era that alienated significant portions of the nation, coupled with economic reforms and major diplomatic realigning, including membership of NATO. The DP is seen by many as the predecessor of the liberal-conservative political movements of the Justice Party (AP) of the 1960s and 1970s, the Motherland Party (ANAP) of the 1980s and the Justice and Development Party (AK Party) of the 2000s.

From 1960 to 2000, there was serious military interference in politics and overt takeovers of governments in 1970 and 1980. The year 1998 also saw what was termed as a "soft coup" when an elected government was forced out of office.

Menderes, Polatkan and Zorlu were three of the 15 sentenced to death at the trials held on Yassıada, which was a no-go zone for decades. While the rest were pardoned, the death sentences of the three leading DP politicians were carried out on the nearby İmralı Island soon after the decisions by the military tribunals.

The island was run by the Naval Forces until 1993, before being transferred to the Istanbul University Fisheries Department. The ownership of the island in 2011was first transferred to the Culture Ministry and then the Union of Chambers and Commodity Exchanges (TOBB), which will oversee the building of a 103,700-square-meter congress center.

The center will be built in a year and will include a hotel, helicopter landing pad, Freedom Platform, cafes and restaurants, Democracy Martyrs Monument, a library, exhibition spaces museum and a conference hall.

Prime Minister Davutoğlu, speaking at Thursday's ceremony, said Yassıada, and its neighbor Sivriada Island, would be preserved with all its history intact, including the historical Byzantine buildings. He also said all trees on the islands would be protected, with each one cut replaced by another.

He called on opposition parties to back the government motion to hold a parliamentary session every May 27 on Yassıada in a statement of determination that says Parliament will never again be forced to shut down.

He said the island would host democracy workshops, peace talks and congresses, adding that the hotel and the rest of the complex were not built to host any entertainment functions. Davutoğlu accused the CHP of acting opportunistically in 1960 by taking over the government under military supervision. "If all parties had united like DP cadres in seeing that the coup was targeting the nation's will rather than acting opportunistically to exploit the coup knowing that they couldn't beat the DP in elections, no one else would have dared to topple elected governments," he said.

He described Menderes and his friends as the heroes who ensured future generations would live in democracy. Davutoğlu also reminded people that 14 May was the 65th anniversary of the DP coming to power, the first time an election allowed a democratic change of government.

He said the AK Party government's decision to stand against military interference on April 27, 2007 had prevented a likely change in the government. The chief of staff at the time, Yaşar Büyükanıt, had released a statement insinuating that the military would not allow Abdullah Gül, the AK Party's presidential candidate, to run. The government, rather than acceding to military pressure opted to call general elections, which showed it had the public's support.

Davutoğlu said Turkey was still bound by the Constitution prepared by the military coup regime of the 1980, repeating the AK Party's campaign pledge for June 7 parliamentary elections is that it will change the Constitution.

"No one should doubt the fact that Turkey will never again live through the pain caused by military coups," he said, adding that the complex on Yassıada would be utilized to increase awareness on the cost of coups and the value of democracy.

Ümran Menderes, the daughter-in-law of Adnan Menderes, also attended the ceremony. She said she was glad that the island would serve as an object of lesson to future generations, adding that it was the first time she had visited the island.

Emine Gürsoy Naskali, the granddaughter of Celal Bayar, the president at the time of the coup and who was initially sentenced to death but commuted to a prison sentence due to his age, said the military tribunals held at Yassıada were done to justify the military coup. "For many years, the island was a military zone with no one allowed to enter. I'm glad it is being opened so that Istanbul residents will have a place to visit. However, for the loved ones of those who were tried here, it is a depressing place," she said.

The Parliament restored the honor of the executed politicians at a session on April 11, 2010. The same law allowed the transfer of the bodies of Menderes, Polatkan and Zorlu from İmralı Island to a monument built in their honor in Istanbul's Vatan Avenue.