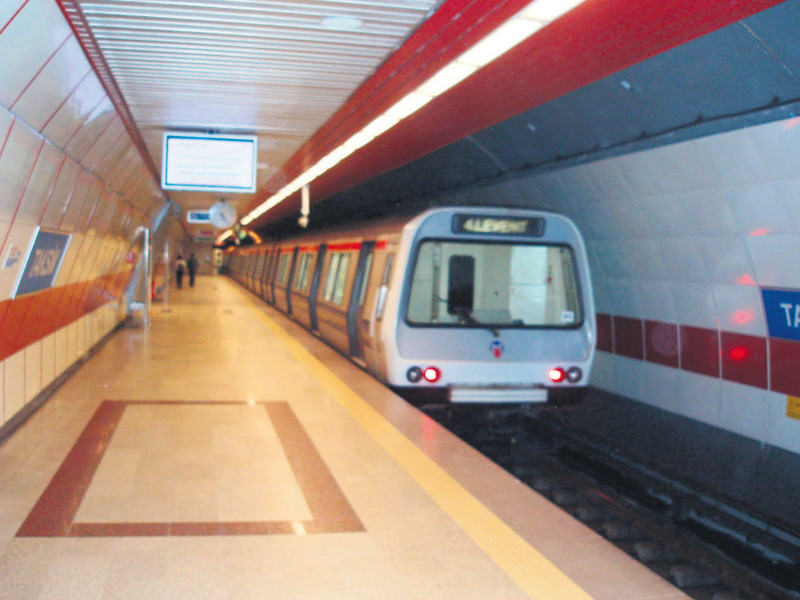 Istanbul's metro line, which was confined in a short distance on Istanbul's European side, has seen a major boost in the past decade with new lines on both sides of the city.
by Daily Sabah May 21, 2015 12:00 am

Istanbul will have a new metro line between Mecidiyeköy and Kabataş, two districts on the European side, whose construction was inaugurated yesterday in the latest drive to expand the city's metro network

The construction of a new metro line that will connect Istanbul's two districts Mecidiyeköy and Kabataş was launched on Thursday.

The line will stretch from Mecidiyeköy, a main commercial district on the European side of the city, to Kabataş, a hub of ferry ports by the Bosporus, through the upscale district of Beşiktaş.

It will be a part of a wider metro line from Mecidiyeköy to Mahmutbey, a main intersection of two highways straddling Istanbul on the far western side of the European side. Four stations will be built through a 6.5-kilometer line that is expected to be operational in 2018.

Speaking at the ground-breaking ceremony, Istanbul Mayor Kadir Topbaş said the new line will cost TL 455 million ($175 million) and will carry 700,000 passengers daily. He said the line will connect six districts of Istanbul through connections to other means of public transportation, including the metrobus and a metro line between Yenikapı and Levent districts.

The Istanbul municipality, which has stepped up investment in mass transit in recent years, had announced three other metro lines recently. Two lines connecting Ataköy to İkitelli on the European side and Dudullu to Bostancı on the Asian side are in the bidding process while another line connecting Bakırköy and Bağcılar district is under construction.

Last month, a 3.3-kilometer "mini-metro line" was inaugurated between the Boğaziçi University compound and Levent, a main commercial hub that swarms with thousands of commuters daily.

The metro is one of the fastest ways to get around Istanbul, a city of over 14 million people that suffers from chronic traffic problems, named the second-worst in the world after Moscow.

Efforts to expand the metro line, which was only 45 kilometers long a decade ago, are still underway with new lines planned to reach as far as Beylikdüzü on the European side to Pendik on the Asian side. President Recep Tayyip Erdoğan had said during his tenure as prime minister in 2013 that they envisioned expanding the network to over 700 kilometers this decade.

Focusing on mass transit is a chief strategy of authorities to ease the traffic congestion in the city where over 3 million vehicles out of 19 million across the country are registered.
Last Update: May 21, 2015 11:45 pm
RELATED TOPICS