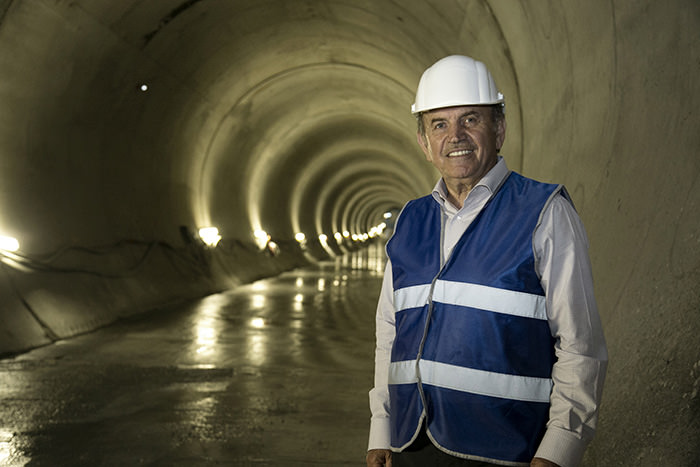 | AA Photo
by Daily Sabah May 23, 2015 12:00 am
Istanbul Metropolitan Municipality's continuous projects to build new metro lines will ease the city's ongoing congested traffic problem and commuters will rarely use their vehicles, said Istanbul Mayor Kadir Topbaş on Friday during his inspections at the construction site of Üsküdar-Sancaktepe metro line, which he also said will operate as a 'smart metro line'.

"This line, when completed, will operate as a 'smart metro line', without a machinist. We use a technology which enables the train to operate on its own and able to stop at metro stops without a driver. This is a new system and only a few places use this technology in the world. Istanbul Metropolitan Municipality is also now one of those using this system," Topbaş said

Expressing his pride of the many new metro projects, Topbaş added: "This is not an easy job. States do this job [such big projects] in the world. As Istanbul Metropolitan, we build these metros with our own budget."

The new metro line which is expected to carry commuters in about a year, will be used by approximately 700,000 passengers on a daily basis.

Efforts to expand the metro line, which was only 45 kilometers long a decade ago, are still underway with new lines planned to reach as far as Beylikdüzü on the European side to Pendik on the Asian side. President Recep Tayyip Erdoğan had said during his tenure as prime minister in 2013 that they envisioned expanding the network to over 700 kilometers this decade.

Focusing on mass transit is a chief strategy of authorities to ease the traffic congestion in the city where over 3 million vehicles out of 19 million across the country are registered.