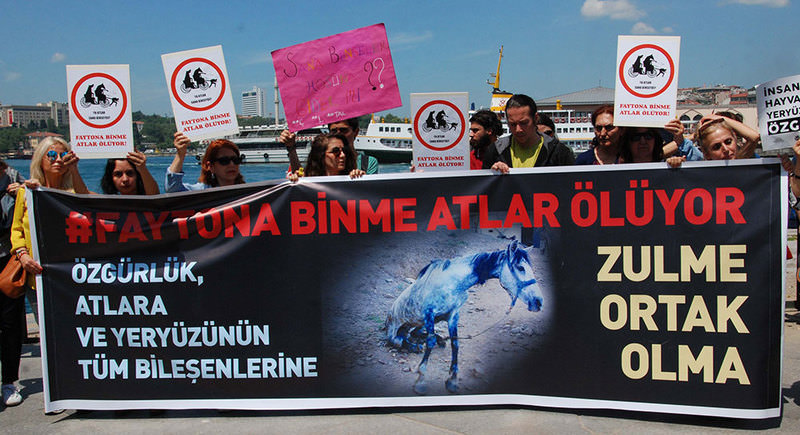 Think twice before you jump into a horse carriage in Istanbul's Princes' Islands this summer, as over 500 horses die in a year due to abuse, heat, overloaded carriages and exhaustion

Animal rights activists staged a protest on Sunday in front of the Princes' Islands Pier located in Istanbul's Kadıköy district to protest the abuse and maltreatment of horses used in the island's landmark horse carriages.

Activists stated that over 500 horses die a year in the Islands, and using them for touristic purposes or horse carriage nostalgia is nothing but participating in the cruelty against the animals.

Elif Narin, the spokesman for the group, stated that each year over 500 horses die in the islands as a result of their lungs exploding (pneumothorax) while trying to carry people on steep roads, or they are involved in accidents and abandoned to die in the woods due to their injuries.

"Despite the claims of carriage riders, we are not quarreling with anyone's bread and butter. However, we are not on the side of cruelty. We want to say that a source of income free of cruelty and blood, and transportation without engines and abuse is possible in the Islands," Narin said.

"Our demand is not less carriages or better conditions of horses, but the total abandonment of horse carriages. Our demand is the return of freedom to horses, the right which all living creatures have by birth" she continued.

Passengers waiting for the ferry to the islands have also supported the protest.

Most tourists coming to the islands come across with such peaceful views, however, sometimes the reality is quite the opposite. In 2012, a carriage driver died, while six Libyan tourists (on a carriage supposed to carry four) were injured as horses got out of control due to speeding.

Princes' Islands, consisting of four large and five small islands approximately two to five kilometers off the Anatolian side coast, is an important getaway location for their natural beauty and tranquility. The four large islands, inhabited by 15,000 residents, are closed to traffic and horse carriages are the only option to travel on the islands other than bicycles. 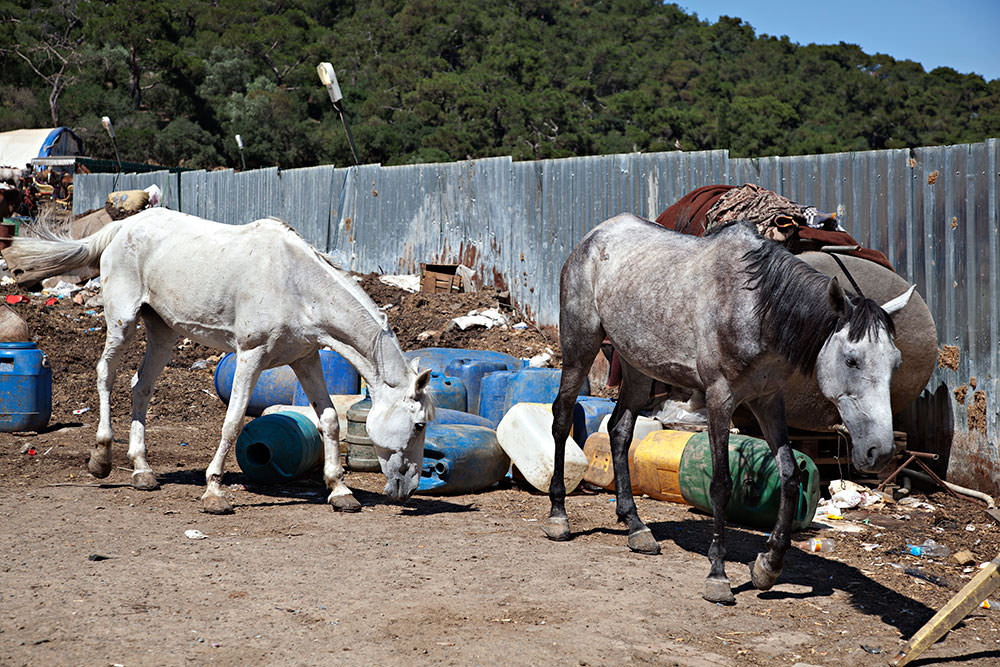 The rising tourist demand, poor conditions and lack of inspection have led to the increasing abuse of the horses and the attention of animal rights groups and locals over the issue. More than 1,000 horses and around 250 carriages are present in the islands. Most of the horses brought to the islands are either old horses or former and crippled race or utility horses, which leads a very high turnover rate as most horses die in the summer when tourist numbers and temperatures peak. The working and living conditions of carriage riders are also very poor.

Most locals from the islands also ask for the carriages to be removed due to heavy traffic created in the summer, unaffordable prices and pollution caused by horse manure.

Electric carriages were earlier proposed to replace horse carriages, however it was met with resistance from carriage riders and some locals.