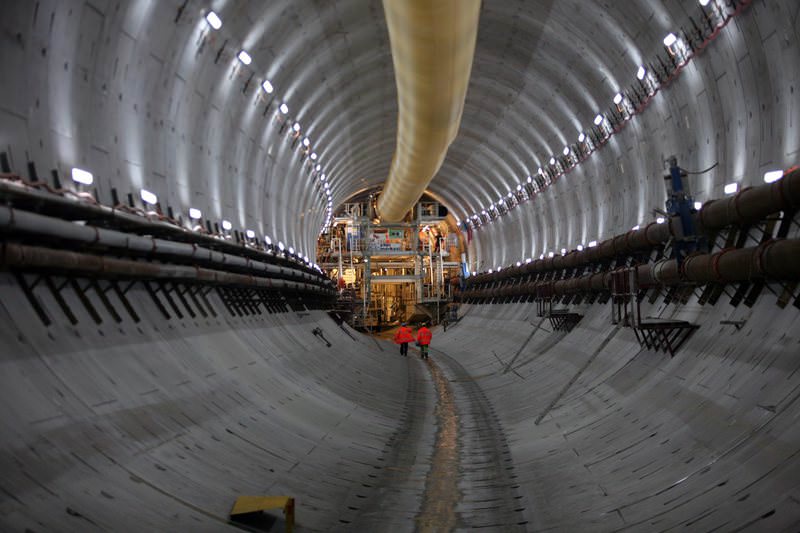 |File Photo
by Anadolu Agency Jun 02, 2015 12:00 am
A huge underground road tunnel being built underneath the sea in Istanbul is meters from being completed.

The project, also known as the Istanbul Strait, could be completed ahead of schedule, Turkey's deputy minister of Transport, Maritime Affairs and Communication, Yahya Baş, has said.

Speaking at the tunnel's construction site, Baş said: "The construction period is continuing very successfully. As we are counting the last meters, we will complete the project sooner than expected."

The project, aiming to reduce congestion and relieve traffic density on the huge suspension bridges which cross the Bosphorus strait, is set to open in 2016.

Cars will pass through the tunnel in 15 minutes and the passage fare will be $4 for each vehicle.

"There are only 780 meters left to dig and complete the tunnel section under the sea" said project engineer Emin Karaman.

"I think we will see the first light in the tunnel this August or September," he said.

In December 2006, Turkey's Transport and Communication Ministry tendered the project under the name of the Istanbul Bosphorus Tube Crossing Project.'

The project was contracted in 2009 with the cooperation of a Turkish-Korean joint venture, which was later named as Eurasian Tunnel Operation Construction and Investment-ATAS-in 2011.

The Eurasia tunnel will be Turkey's second underwater project in Istanbul after the Marmaray, a railway tunnel underneath the Bosphorus Strait which has already transported around 21 million passengers in the first six months following its inauguration in October 2013.

Davutoğlu had described the 6.5 km-long tunnel as the first of its kind in the world, as it is comprised of one rail system between two highways for motor vehicles 110 meters under the Bosphorus Strait.

Moreover, a third bridge over the Bosphorus is currently in construction and is expected to be ready by the end of 2015. IC ICTAS Construction Company, which is building it, claims the structure will be the widest (59 meters), longest (1,048) and highest (320) bridge in the world.

Despite being noticeable improvements, these projects have struggled to diminish traffic flow in the city.

According to many transportation experts, Istanbul's traffic still needs a permanent solution-which is expanding the railways across the city.

Indeed, the city has plans to add more than 600km of metro railway to its current 150km network by 2019.

However, until then, Istanbulites may have to content themselves by honking their horns.
Last Update: Jun 02, 2015 4:57 pm
RELATED TOPICS