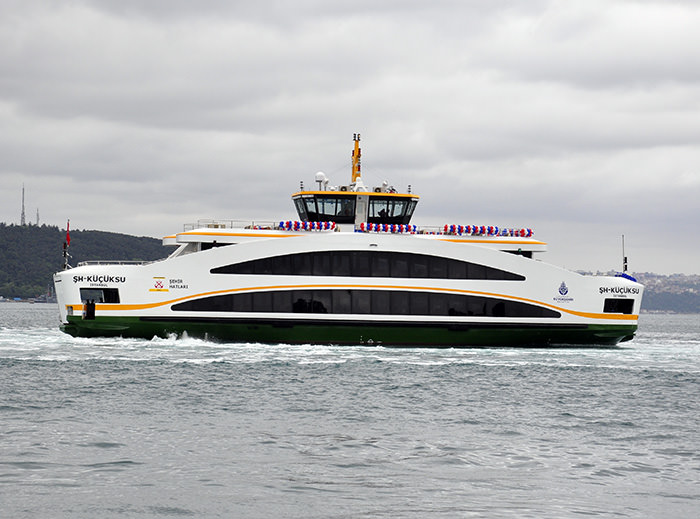 | AA Photo
by Anadolu Agency Jun 04, 2015 12:00 am
Istanbul is famous for its large, lumbering ferries which make thousands of journeys across the Bosphorus every year. Now, residents are up in arms over multi-million-dollar plans to introduce new ?unconventional' ships.

For generations, Istanbulites have enjoyed crossing the sea and being able to toss pieces of Turkish bread (simit) to flocks of seabirds which routinely follow the ferries on their many journeys.

However, this iconic scene could be a rarer sight if the fleet of new ships is introduced.

The domestically designed craft-built at a cost of 13.5 million euros ($15.3 million)-are enclosed, meaning the days of passengers being within touching distance of the water could be over.

However, the ferries' supporters point to the 700-passenger-capacity crafts' modern facilities-including improved access for disabled people.

The ships have also been designed with better maneuverability and propulsion to cope with the strong tides and currents of the Bosphorus strait. Their double-ended design means the ferries are also able to navigate from one dock to another without having to turn around.

However, some local media have dubbed the ferries "floating plazas" while some citizens took to Twitter to denounce the new ships as being "unconventional" and "disappointing".

According to Twitter, some Istanbulites firstly felt "tore up" for not being consulted by the municipality before the ferries' introduction.

"NO! Istanbul ferries (with open decks to feed simit to seagulls) to be replaced by ugly tin cans?!? WHO DECIDED THIS?" posted @zeynep while former ambassador of Turkey to the U.S. @NamikTan asked: "Where did the ferries come from?"

Sharing the photos of the new ferries, @NamikTan added: "If they were consulted, the public would not give approval for these aesthetic disasters."

In March 2005, five new ferries, whose designs were selected by a referendum of people living in Istanbul, plus three new Golden Horn ferries with panoramic views, began to serve passengers.

Istanbulites also 'slammed' the latest ferries for lacking an open deck, claiming that 'Istanbul means feeding seagulls with simit from a ferry.'

The ferry is one of the oldest means of transportation in Istanbul as the city is naturally separated by the Bosphorus strait and surrounded by sea.

Although the ferries have been replaced by the Bosphorus bridges and the Marmaray undersea rail tunnel, they still have a key role in the history of the city and carry a huge number of people.

City-line Ferries' general director, Suleyman Genc, previously told Anadolu Agency that in 2010, the number of passengers transported via the ferries in Istanbul was 43 million per year, whereas the number increased to 45 million in 2011 and to 50 million in 2012.