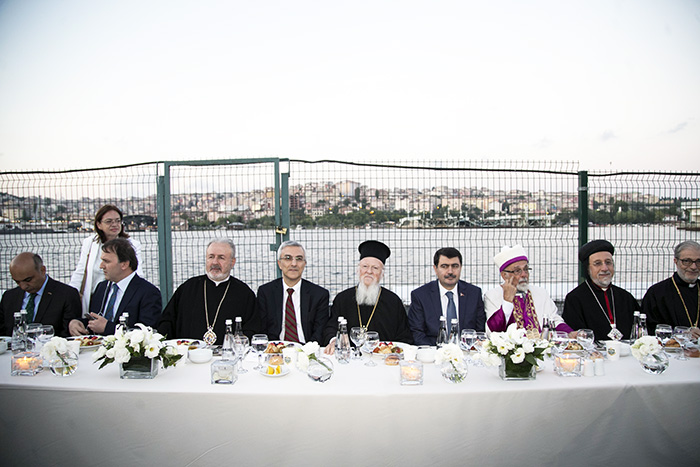 Turkey’s Jews and Armenians and Greek Christians along with members of other religious communities met in Istanbul for iftar, a fast-breaking meal for Muslims, in an event to mark peaceful coexistence between all groups

Leaders and members of religious communities including Turkish Jews and Armenians and Greek Orthodox communities came together at a dinner for the Muslim faithful on the occasion of the month of Ramadan, during which Muslims break their fast with an iftar dinner.

The iftar, held in the courtyard of Or-Ahayim, a Jewish hospital in the historic Balat district of Istanbul, marks the solidarity of different faith groups that suffered at the hands of oppressive state policies in the past. As a sign of this solidarity, an imam, a Jewish cantor and an Armenian Orthodox priest recited prayers together after the dinner.

Speaking at the event on Monday evening, Toros Alcan, a representative of religious communities at the General Directorate of Foundations and a leading figure in the Turkish Armenian community, said such events have become a symbol of brotherhood, peace and shared productivity in Turkey. Last year, representatives of faith groups came together for an iftar dinner at Istanbul's iconic Taksim Square. Alcan said this year's venue for iftar was meaningful, as it was a hospital built upon an order from Sultan Abdülhamid II and a place where Jewish doctors had healed the "people of these lands" for over a century. Alcan highlighted the fact that Anatolia has remained an oasis of peace for centuries for all religious communities. He underlined that religious communities including Armenian, Greek and Syriac Christians; Jews and others still have problems in need of solutions and hoped their problems would be gradually resolved in a "renewed" Turkey.

İshak İbrahimzadeh, leader of the Turkish Jewish community, praised the state for returning the properties of non-Muslim religious communities, adding that they expected Kamp Armen, an Armenian orphanage, would be returned to its original owners, the Armenian community, as well. Kamp Armen a building constructed in the 1960s in Istanbul's Tuzla district. The state had confiscated the building and its plot under a policy paving the way for impounding properties of minority communities. When the latest owner of the property, who bought it from the Treasury, decided to demolish it, Armenian activists launched a campaign to stop the demolition. The owner finally yielded to the protests and announced he would return the property to the Armenian community. Armenian activists claimed that the site still had not been returned since it was announced in May.

Istanbul Governor Vasip Şahin expressed his happiness for being at an event where different religious communities had come together and thanked the groups for organizing the event.

"Our civilization is one that teaches to show deep respect for beliefs and differences through toleration," Şahin said.

"Being respectful and tolerant of each other is a common heritage of this land. Our goal is to protect this heritage and establish a common future in peace and tranquility," Şahin said.

Turkey, a secular country, has a Muslim-majority population. State policies for decades discriminated against non-Muslim communities, including Jews and Greek and Armenians.

Properties of religious communities were forcibly seized and many were forced to leave the country due to repressive policies. The Justice and Development Party (AK Party) government, in power since 2002, moved to restore their rights as part of democratization reforms.

Adnan Ertem, head of the General Directorate of Foundations, which oversees properties of religious communities, said at the event that although the return of all properties was not completed yet, it is safe to say that the state was exerting efforts.