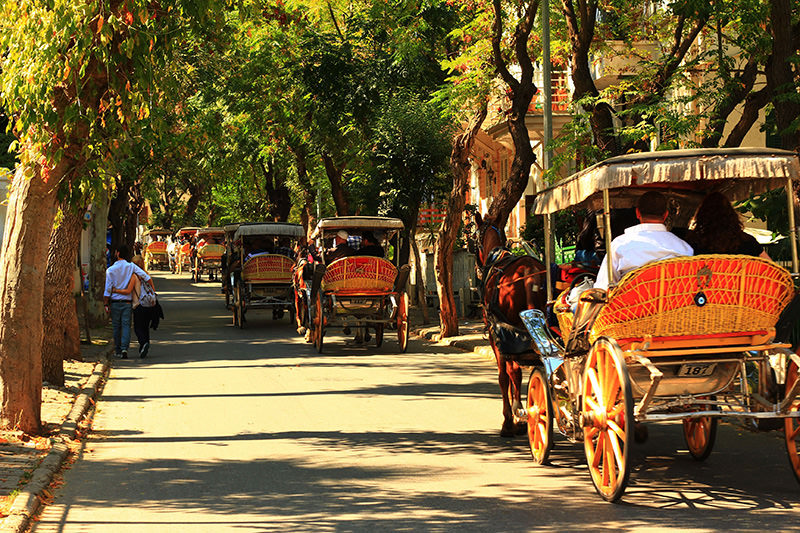 | IHA Photo
by Daily Sabah Aug 12, 2015 12:00 am
Residents of Princes' Islands ('Adalar') around Istanbul, which make a great destination to escape from the busy rhythm of the city, have recently started a campaign that demands island visitors be charged with a fee from now on. The campaign comes following the frustration of island residents that has arisen especially in recent years over the massive summer crowds.

Prince's Islands, or 'The Islands' (Adalar) as Istanbulites refer to as, lie about 20km southeast of the city in the Sea of Marmara, making a great destination for a weekend escape from the hustle of the city. There are a total of nine islands in the Princes' Islands group, but the ferry takes Istanbulites to only four of these via two stations, one in Kabataş on the European side, the other in Kadıköy on the Asian side.

With an easy ride to the islands lasting at most one hour to the furthest one, thousands of people each day, if not more on weekends, flock to the islands. This situation definitely makes shop owners on the islands happy, as they benefit from lively commerce, but it has been frustrating island residents, most of whom live on the islands to relax and escape hectic city life.

However, it is not only the crowds that are troubling island residents, but the tourists that litter islands' streets and the poor conditions of the horse coaches, for which tourists line up during the summer since vehicles are not permitted on the islands. This is why some of the island residents have recently launched a controversial campaign on charge.org platform so that there be a certain fee for stepping on the islands.

The campaign said during summer months and on holidays, an average of 45,000-50,000 people flock to the islands as a result of which there is no space left "to walk and breathe" on the islands, on top of which number of bicycles have reached an enormous figure, creating noise pollution from the horns placed on the bikes.

"Island residents can no longer accommodate the visitors in a peaceful and safe manner," the campaign argued.

The island residents therefore suggested that a fee of 5-10 TL ($1.8-3.6) be charged to visitors to ease "people pile-up", demanding from relevant authorities to undertake the relevant action. The residents said, another system other than charging people might be also an option to ease their situation, but did not mention what kind of a system this would be.

The campaign, however, created a controversy between island residents themselves. There are residents who argue against the campaign, saying that no one can limit anyone else's freedom of travel. Those say, "For example, if island residents were charged to step enter any of Istanbul districts, what would they feel?" However, those stating a contra-argument against this say, the islands have been damaged with over-capacity and there would have to be a quote to solve this situation.