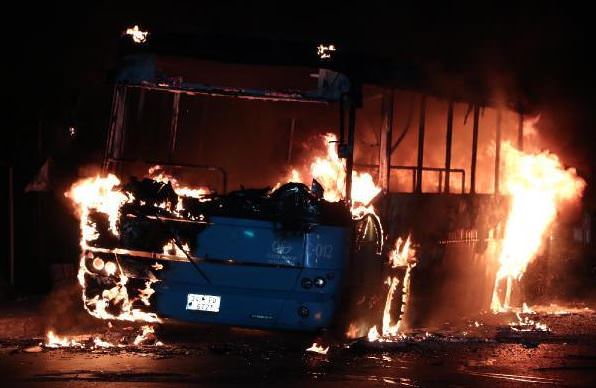 by Daily Sabah Aug 25, 2015 12:00 am
A masked group of terrorists attacked a public bus in Istanbul's Okmeydanı district late Monday.

The perpetrators blocked the Darülaceze Avenue in the Okmeydanı district, which is the stronghold of the Revolutionary People's Liberation Party–Front (DHKP-C) terrorist organization, and threw molotov cocktails at the bus. After the passengers and the driver got off the bus, the terrorists set the bus on fire with the molotov cocktails.

Having chased the terrorists for a while, the driver returned to the scene and put out the fire with a fire extinguisher. The bus was heavily damaged, however no casualties have been reported from the incident.

The driver of the bus, Harun Kılıç said that he dropped the passengers off after the terrorists blocked the road. He also added that the terrorists set the bus on fire with molotov cocktails just after he got off the bus.

Security officials have taken extensive measures in the area and have commenced an investigation into the terror attack.
RELATED TOPICS