93 detained over attacks on media, political parties in Istanbul: Governorate 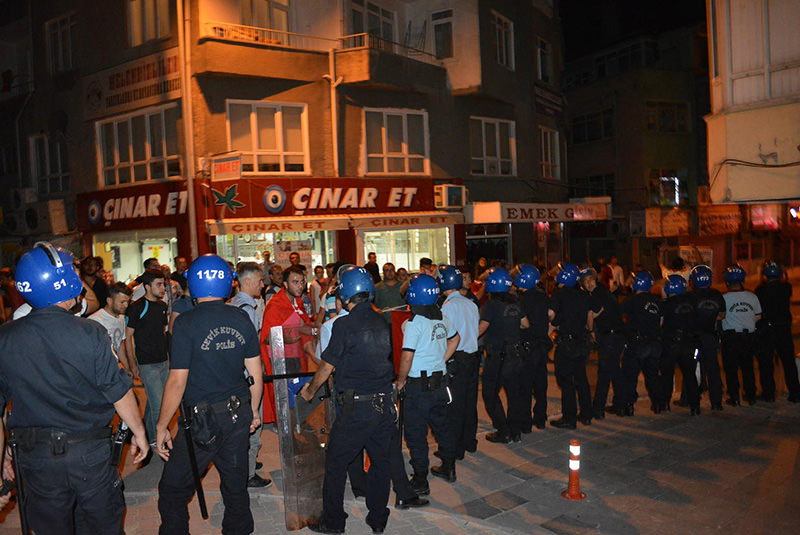 | DHA Photo
by Daily Sabah with Wires Sep 09, 2015 12:00 am
The Istanbul Governorate announced on Wednesday that a total of 93 people were detained over attacks on press organs, political party buildings, and business premises on Tuesday night.

"The rallies were conducted in response to terror incidents, undertaken usually uneventfully in common sense, but in some of our districts, party buildings, press organs, and business premises were damaged. No one died or was injured during the incidents," the Governorate's statement said.

Nationalist demonstrators overnight targeted dozens of offices of the Peoples' Democratic Party (HDP) in demonstrations following a succession of deadly attacks on the armed forces and police officers by the PKK terrorists.

Late Tuesday, a HDP office in the capital Ankara was attacked and torched while another branch in the southern city of Alanya was also set on fire.

Nationalists accuse the HDP of being the political wing of the PKK, which has killed dozens of members of the security forces in recent days. The HDP denies the allegation.

The headquarters of the Hürriyet and Sabah newspapers in Istanbul were also attacked on Tuesday.

Deputy Prime Minister Numan Kurtulmuş held a press meeting on Wednesday, during which he said, "It is unacceptable that political parties are attacked, we need to show our reactions in dignity," adding, "We condemn attacks on press institutions and investigations will be launched against those who undertake them."

"It is an out-and-out lie that the AK Party and government directed the attacks against HDP buildings."

Kurtulmuş said the AK Party, which is preparing for a Nov. 1 general election, was taking the "utmost care" to calm the situation.

"It is wrong to attack party buildings," he said, speaking at Anadolu Agency's Editor's Desk Wednesday. "Actual and physical attacks are vandalism, unlawfulness."

Prime Minister Davutoğlu has also condemned attacks on media, political parties, and civilian property and urged citizens to remain calm during the operations launched against the PKK terrorist group over his Twitter account on Tuesday evening.

"The objective of terrorism is to undermine our unshakeable, brotherly ties. Attacking the press and the property of political parties is unacceptable," he wrote on Twitter.