Cyclists to use mass transport without any extra charges in Istanbul 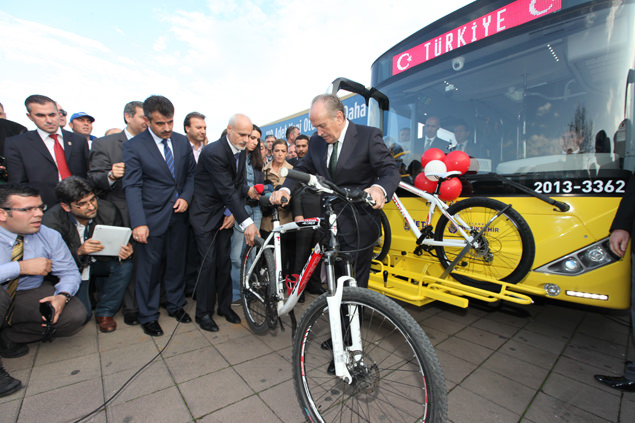 Istanbul Electric Tram and Tunnel Establishments (İETT) is now offering safe travel to cyclists in the city. Istanbulites who love to travel by bike will be able to use public buses more easily thanks to new İETT buses equipped with bicycle kits. The project, which was initiated by officials from the Istanbul Metropolitan Municipality (İBB), İETT and the Bicycle Transportation Platform to encourage people to ride bicycles, increase the number of cyclists using public transportation with their bikes. From now on, cyclists can use buses equipped with bicycle kits throughout the day and other buses free of charge between 9:00 a.m. and 4:00 p.m. as well as between 10:00 p.m. and 7:00 a.m. Thanks to the project, cyclists will be able ride their bicycles in parks to stay connected to nature. Istanbulites who use their bicycles both for short and long journeys will also be able to travel safely.

İETT General Manager Mümin Kahveci asked cyclists to closely follow the rules. "We have been working on the project, which was initiated to encourage cycling, for a long time. We believe that passengers with bicycles will act responsibly and follow the rules. While we were preparing the transportation plan for our cyclist passengers, we took rush hours into consideration," Kahveci said. He added that the increase in the number of cyclists in Istanbul is a positive development. "Moreover, we handed out informative leaflets to our drivers to provide cyclists with a more comfortable travel experience," Kahveci concluded.