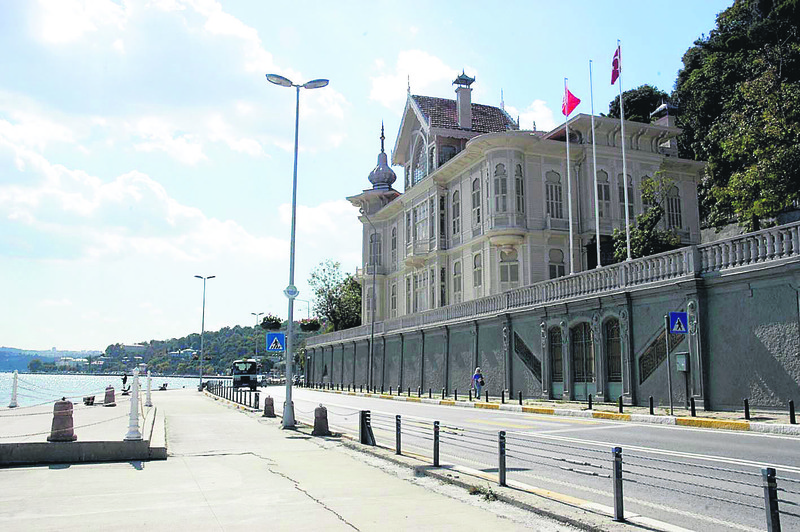 by Hasan Ay Oct 22, 2015 12:00 am
The Presidency's Huber Mansion in Istanbul's Tarabya neighborhood and its coach house will be renovated. The mansion is one of the city's most significant architectural structures and is located within a 34-hectare forested area alongside the Bosporus. The restoration project was designed to help protect this important piece of Istanbul's heritage. It is being carried under the guidance of Professor Oğuz Ceylan of Mimar Sinan Fine Arts University and has been approved by the regional committee. The restoration project has been undertaken by Güryapı Restorasyon. Both the mansion and the coach house will be restored without harming their original structures. As part of the project, sculptures of a pomegranate tree, hunting dogs and fountains as well as reliefs on the mansion's sustaining wall will be renovated. A new landscaping project will also modify the area of land surrounding the mansion.

The mansion takes its name from the Huber Brothers, who were arms brokers and worked for the German-based Mauser and Krupp companies from the end of the 19th century to the early years of the 20th century. The brothers preferred to stay in the mansion, as it was close to the summer residency of the German embassy. The date of construction and the name of its architect are not known. Italian architect Raimondo D'Aronco, who took part in the construction of important buildings in Istanbul, designed some additions for the mansion. After the return of the Huber Brothers to Germany in 1932, the mansion was acquired by an Egyptian princess, Kadriye, and her husband, Mahmut Hayri Pasha. Later, it was donated to Notre Dame de Sion in the names of Therese Clement and Aimee Odent. The mansion was taken over by Clement and Odent's beneficiaries and later acquired by Boğaziçi İnşaat Turizm A.Ş. It was expropriated in 1985 and allocated to the General Secretary of the Presidency. The mansion was under restoration from 1986 and 1988, yet the changes made were insufficient to protect the historic structure properly. Another restoration took place from 1993 to 2000. Although the mansion has not been in use for a long time, former President Ahmet Necdet Sezer welcomed his guests at the mansion during his term of office.
RELATED TOPICS