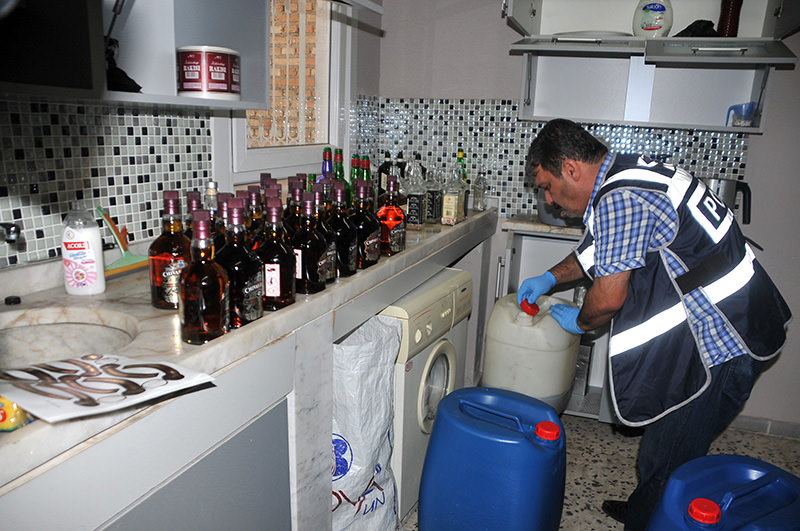 | File photo
by Compiled from Wire Services
Nov 01, 2015 12:00 am
The death toll from the consumption of bootleg raki in Istanbul reached 19 on Sunday. Experts fear that number will increase since several people who consumed the poisonous beverage are still in critical condition.

Anadolu Agency reported that 19 people have died since Oct. 18. The agency said 91 people have been admitted to hospitals over the past 12 days, and 15 remain in intensive care units while four suspicious deaths are being examined by the coroner's office to see whether they are linked to the bootleg booze.

The deaths have been linked to the consumption of methyl alcohol, a deadly substance found in bootleg liquor which is preferred by many customers because of its low price.

Meanwhile, 21 people accused of producing and selling the drinks are being questioned after they were detained by police in operations carried out across the city. Police seized thousands of bottles of illicit drinks from secret distilleries in Istanbul. Three distilleries have been discovered so far.

Turkish media outlets reported that the suspects told police in their initial interrogations that they thought they were supplied ethyl alcohol while producing the drinks. A suspect charged with selling methyl alcohol denied the charges and said the sellers were fully aware of the situation.
Doğan News Agency reported that Hikmet B., one of the detained bootleg drink sellers, told police he would taste the drink himself first but later rescinded the offer, saying he was sick with the flu. One of his friends who drank the raki died while another one is fighting for his life.

Hikmet B. told police he learned how to distill raki from the Internet. "It was a hobby for me. After a few attempts, I found out I can do it. I started distilling in June. The police captured me earlier this month but I was released and returned to work," he said. Hikmet B. said he would file a criminal complaint against the people who sold him methyl alcohol and insisted nobody died of the raki he sold.

The suspects are charged with involuntary manslaughter.

Poisoning by bootleg liquor is not new in the country where over 20 people died of alcohol poisoning over a short period in 2005, but these new cases point to a comeback in illegal production.
Last Update: Nov 01, 2015 4:43 pm