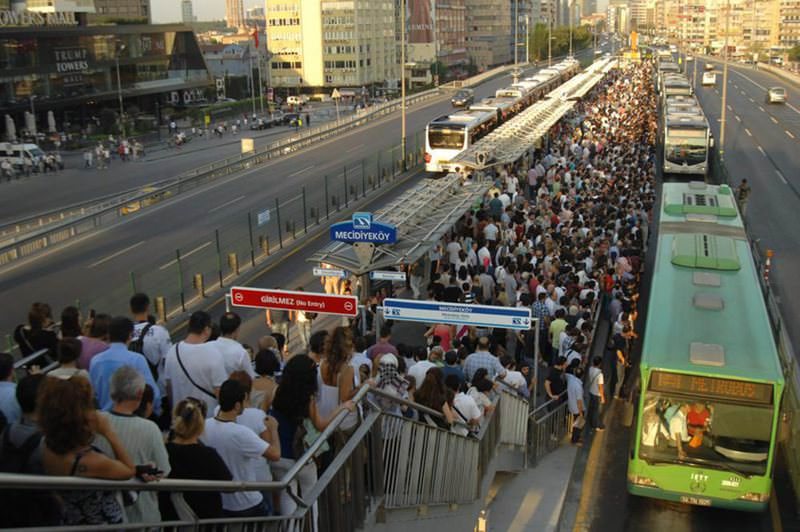 by Daily Sabah with DHA Nov 17, 2015 12:00 am
Eight years after it debuted, Istanbul's metrobus system has dampened commuters' hopes of a better option in frustratingly slow traffic, with the metrobus now the source of its own traffic.

Introduced to relieve the traffic burden in Istanbul, the metrobus operates on its exclusive lane stretching from the European side of the city to the Asian side. But the ever-growing population of the city, which is estimated to be more than 17 million, leaves the mass transit system overwhelmed with passengers.

Commuters complain of overcrowding in metrobuses, especially during rush hours, and have called on authorities to further extend existing metro lines as an alternative to metrobuses.

The problem with metrobuses was evident after a stampede two days ago at a station in the city's Beylikdüzü district. Passengers traveling via metrobus to a venue hosting a popular book fair caused commotion at the station due to overcrowding. Unable to move, passengers leaving metrobuses crashed through iron barriers separating the station from the two lanes of the E-5 highway. Meanwhile, hundreds of passengers had to wait for hours to get into the station because of the huge crowd.

Passengers complain of long lines at the stations especially during rush hours. A passenger said the travel time between Beylikdüzü and Şirinevler, two stations on the European side, which originally took 35 minutes, is now 55 minutes because of the large number of passengers. "I can only find a seat if I get on at the first station. Otherwise, you have to stand up for more than one hour. You can barely breath during the journey as you feel suffocated among the crowd. Besides, people often brawl in rush hours to get on the buses," a passenger who preferred to remain anonymous said. Another passenger said metro lines would help decrease the number of commuters taking the metrobus. "They are insufficient now, even their departure times are as short as 20 seconds," she says.

Improvement of public transportation and ways to tackle the growing traffic problem is a priority for the Istanbul municipality that allocated a budget of TL 5.5 billion ($1.9 billion) for transportation projects.

The city plans to add four new metro lines to the existing ones. The Mecidiyeköy-Kabataş, Dudullu-Bostancı, Ataköy-İkitelli and Bakırköy-Bağcılar Kirazlı lines are expected to be completed in the near future. New lines are expected to ease travel on both sides of the city. New lines will be connected to existing lines and will largely serve to integrate the city's rail network with its sea transport, while linking residential districts with industrial areas.
RELATED TOPICS