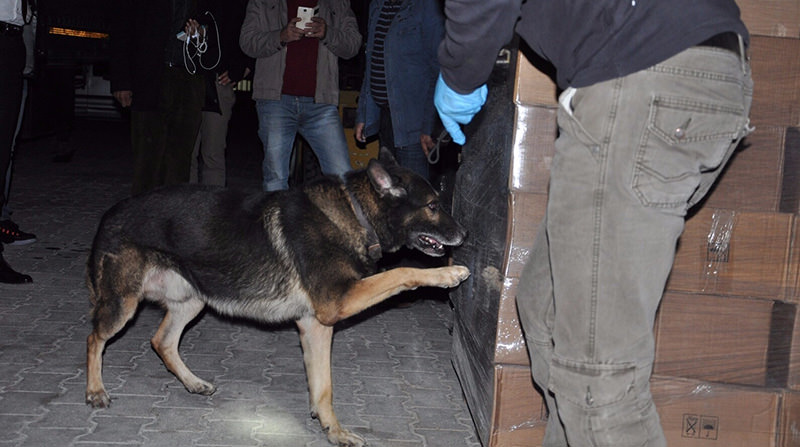 | AA photo
by Compiled from Wire Services Nov 20, 2015 12:00 am
Turkish police seized 10.9 million Captagon pills this week, authorities announced, in what is described as the largest amount of amphetamines captured in the country's history.

Captagon, a synthetic drug made from amphetamine fenethylline is cheap to produce and its composition includes widely available legal substances. Several media reports had said the drug was mass produced in Syria by militant groups in the conflict-ridden country and also widely used by fighters as a stimulant in battles.

The large cache of drugs, reportedly highly popular in war-torn Syria, were found in two separate operations in the southern city of Hatay on the Turkish-Syrian border.

Anti-narcotics police found the drugs, which weighed in at 1.8 tons, hidden in a truck and in a warehouse. Two suspects, one Syrian and one Turkish national, were detained in connection with the bust. Police sources said the operations on Nov. 18-19 were held after surveillance of an international gang.

The police also said the drugs were produced in Syria and would have been transferred to Gulf countries by sea from Turkey, if not seized. The Syrian national captured in the operations is accused of coordinating the transportation of the drugs. Authorities are now investigating international connections of the gang in other countries.

Hatay Governor Ercan Topaca told reporters on Friday that the suspects were planning to transport the drugs to other countries by hiding them in the oil filters of trucks. He said the street price for a single Captagon pill is estimated to be between $3 and $5.

Saudi Arabia is one of the main markets for the drug, where they are commonly seized. Last month, Saudi Prince Abdel Mohsen bin Walid bin Abdulaziz and four others were detained in Lebanon with two tons of Captagon pills. The prince and others in his retinue were accused of attempting to smuggle the pills out of the country in what is described as the largest smuggling operation through Beirut's airport.
Last Update: Nov 23, 2015 10:09 pm
RELATED TOPICS