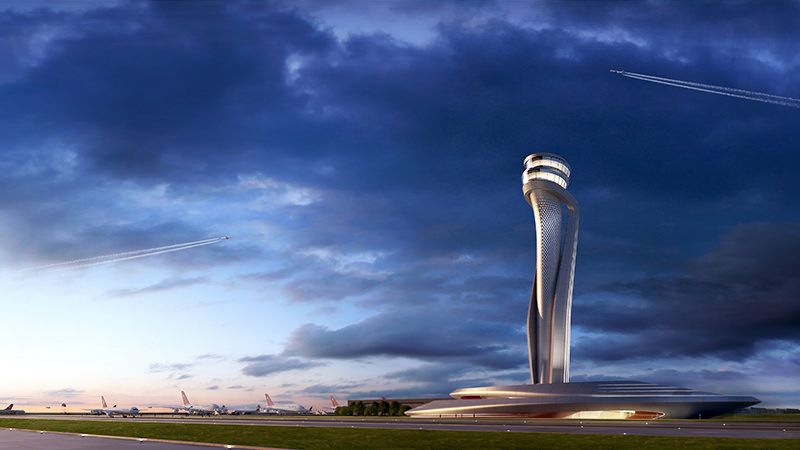 | AA Photo
by Daily Sabah Dec 24, 2015 12:00 am
Pininfarina and Aekom's innovative tulip-inspired design was announced Thursday as the winner of the international design competition for the airport traffic control tower of Istanbul's third airport.

The AECOM and Pininfarina design is an elliptical tower that harnesses aerodynamics. The design combines speed, modernity and romanticism, while its tulip-inspired shape is a beautiful reference to the centuries-old Turkish history.

Initiated by the IGA (Istanbul Grand Airport), the contest saw many world-renowned designers from both aviation and automotive sectors. The tulip-inspired design was chosen from a total of six entries from international architectural teams such as Zaha Hadid, Moshe Safdie, Fuksas, Grimshaw-Nordic and RMJM.

Commenting on the results of the contest, IGA CEO Yusuf Akçayoğlu said that the airport traffic control tower had an especially symbolic meaning for the new Istanbul Airport-which is set to be the world's largest new airport in terms of annual passenger capacity.

Stating that they were looking for just the right design that would fit for a 21st century airport while at the same time remaining sensitive to Istanbul's unique heritage, the CEO said that it was a tough call between the six top designs.

"The new air traffic control tower will be an iconic structure, visible to all passengers travelling through the airport," said Akçayoğlu reminding that the new tower will rise on a 5.000 sq. meter construction area with a height of 95 m.

"We aim to complete the air traffic control tower in October 2017, "he said, adding that the construction will begin in May 2016.

The new airport is currently being built on the European side of Istanbul and the construction is expected to be completed by 2018. It will also have an initial capacity of 90 million passengers per year, but with extensions it will be able to host 200 million.

In October, IGA made an agreement with Turkey's state-owned Halkbank, Ziraat Bankası and VakıfBank as well as foreign-financed banks DenizBank, Garanti Bankası and Finansbank for a €4.5 billion loan for the first phase of the aviation project.