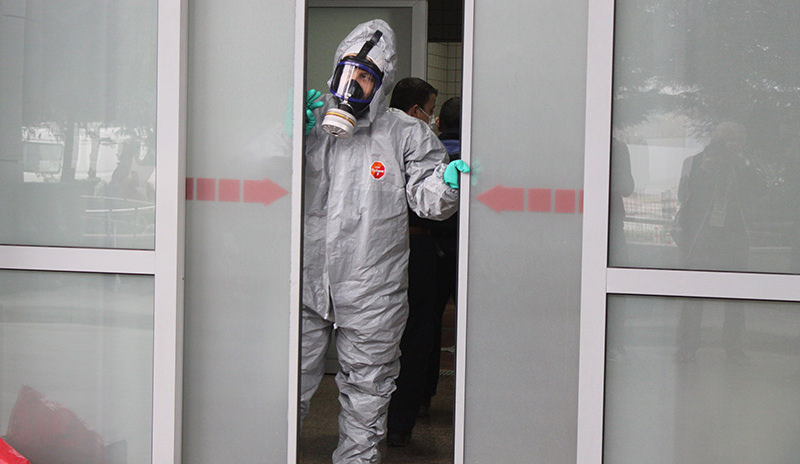 | IHA Photo
by daily sabah Jan 07, 2016 12:00 am
The H1N1 virus, commonly known as swine flu, was detected in two children in Istanbul, authorities said on Friday. The detection marks the flu's debut in the country's most populated city after it claimed eight lives globally this month.

A 5-month-old girl and a 4-year-old boy, who were hospitalized for respiratory problems and influenza earlier, were diagnosed with the infection this week. The two were staying in the same ward, and it is suspected that the boy, who was also hospitalized for a respiratory illness, was infected by the infant. The two children were placed under quarantine in an isolated ward of the Çapa Medical School Hospital in Istanbul's Fatih district.

Health Minister Mehmet Müezzinoğlu recently announced that eight people died of the virus in the first week of January, and all except one had a weak immunity system due to chronic diseases. Müezzinoğlu stressed that the patients had existing diseases that aggravated the effect of the virus. "We have seen an increase in viral infections in the last 10 days," Müezzinoğlu said, warning the public to take extra care of their hygiene and follow healthy diets.

He also highlighted that flu vaccines were provided by the ministry for free, and urged those who are under high risk of infection – people over 65, patients with chronic illnesses and those with weak immune systems – to get shots as soon as possible.

Swine flu was first reported in Turkey in 2009. Initially a strain of flu transmitted to humans from pigs, it mutated into a virus that can be transmitted between humans. Its main symptoms are fever, cough, a sore throat and joint pains. The virus claimed 30 lives last year. It is an airborne virus that spreads through coughing and sneezing, and doctors warn the public to wash their hands frequently and stay away from suspected patients. The virus is usually lethal among pregnant mothers and infants, although it can also affect those with existing chronic illnesses and a weak immune system.