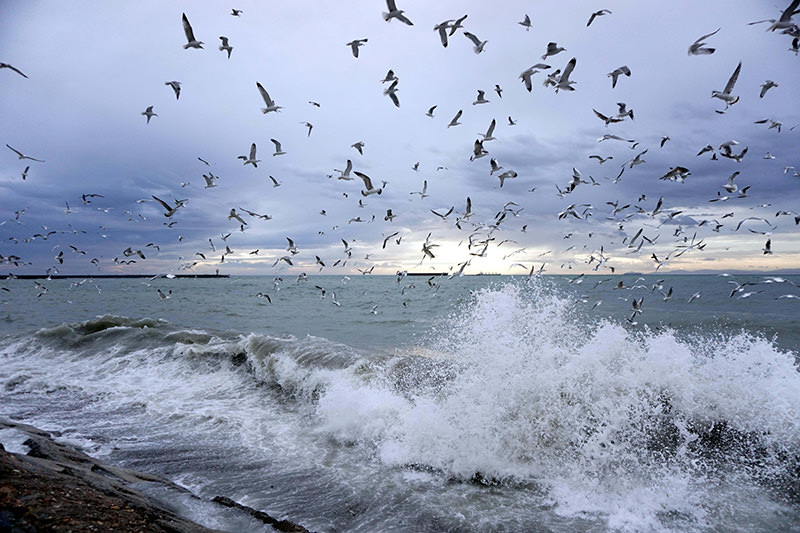 Western regions were battered with strong southwesterly winds on Thursday, which dealt a blow to daily life by leading to cancellations of flights and ferry services in Istanbul, carbon monoxide poisonings and paralyzing maritime transportation in other cities

After days of heavy snowfall last week, Turkey's west is now embattled with southwesterly winds. Strong winds affected daily life in several western cities from Istanbul and Sakarya in the northwest to the city of Balıkesir south of Istanbul.

National flagship carrier Turkish Airlines announced the cancellation of more than 70 international and domestic flights from Istanbul due to the southwesterly winds on Thursday. Winds caused arriving airplanes to delay their landings. Fast ferry and inter-city sea bus services also saw multiple cancellations, cutting off Istanbul's maritime connection to the northwestern cities of Bursa and Balıkesir. Turkey's state-run meteorology directorate warned against strong winds, reaching a speed of up to 90 kilometers per hour. Waves, as tall as four meters, pounded the two coasts of Istanbul's Bosporus late Wednesday and on Thursday.

Maritime traffic in the Marmara Sea, which Istanbul and several western cities are littoral, was severely affected by the winds. Vessels heading to Istanbul or other ports east of the city anchored off the coast of Tekirdağ, which is west of Istanbul, as they were unable to proceed due to winds blowing at 90 kilometers per hour on Thursday and giant waves battering the coast.

In the city of Bursa, 70 people were hospitalized due to carbon monoxide poisonings. Authorities said the victims were poisoned because of insufficient ventilation in houses heated by firewood stoves, and warned the public not to burn the stoves before going to bed. Strong winds also knocked down utility poles and trees across Bursa, while no casualties were reported. Edremit in Balıkesir province was also affected by the winds, with scores of large vessels taking shelter in the Gulf of Edremit as enormous waves hindered transportation. In Sakarya, east of Istanbul, southwesterly winds tore off the roofs of buildings and dozens of cars were damaged when a roof fell onto them in the city.

Meteorology experts warned that winds accompanied by precipitation will affect central and southwestern cities as well today. Strong wind and storm warnings were issued for Konya, Karaman, Aksaray and Niğde in central Turkey and Antalya, and Muğla, Burdur and Isparta in western and southwestern Turkey.

Doctors urge asthma patients to be careful, as the southwesterly winds are known to affect them most. They warn that the winds carrying pollen, spores and sands from faraway deserts may further aggravate respiratory problems in the patients.

The weather forecast shows that the winds will abate this evening in the Marmara region. Meanwhile, the Black Sea region in northern Turkey was expected to be hit by storms Thursday evening, and a storm warning is in place until Saturday morning.

Elsewhere in Turkey, the country's eastern and southeastern regions that are struggling with rainfall and snowfall will see further precipitation at least until Saturday, weather forecasts show. The two regions, along with northern parts of the country, have grappled with dense snowfall over the past weeks. Access to hundreds of villages was closed due to heavy snow from Sinop in northern Turkey to Hakkari located in the most southeastern part of the country.
Last Update: Jan 07, 2016 3:17 pm
RELATED TOPICS