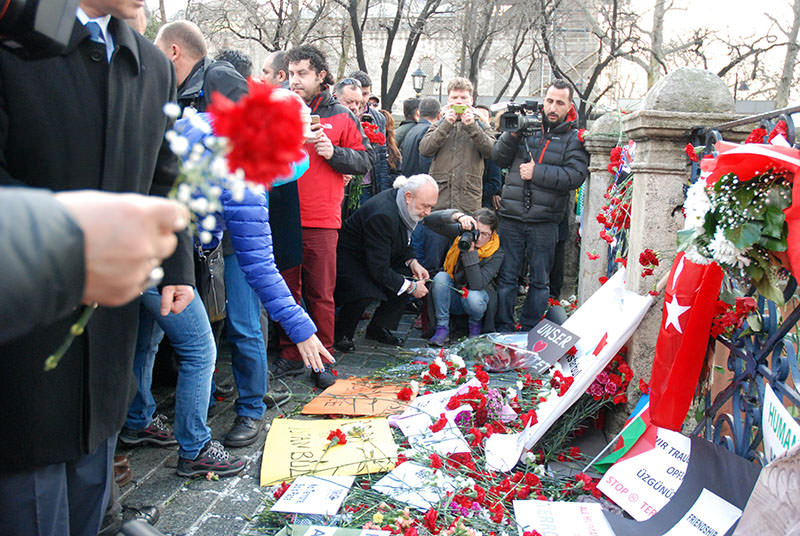 Authorities announced on Thursday that seven suspects were detained in connection with Tuesday’s suicide bombing in Istanbul that killed 10, while media outlets released a portrait of the assailant as a man with close ties to both DAESH and the Assad regime

A suicide bombing on Tuesday in Istanbul's historic Sultanahmet Square prompted a manhunt against possible accomplices of Nabil Fadli, a suspected member of DAESH who blew up his explosive-laden vest amid a group of tourists. On Thursday, Interior Minister Efkan Ala announced that seven suspects were detained in connection with the attack that killed 10 German tourists.

Ala did not disclose the identities or nationalities of the suspects, but earlier media reports claimed they were Syrian nationals. Media reports also claimed that Fadli's relatives were also linked to DAESH while he once worked for an arm of the Syrian regime's notorious intelligence agency, al-Mukhabarat.

Fadli, 28, who reportedly arrived in Turkey sometime between December and the first week of January from Syria, registered as an asylum seeker on Jan. 5 at a state-run migration center in Istanbul where he had to give his fingerprints as part of the registration process. This led to the discovery of his identity by a forensics team investigating the scene of the attack. He was accompanied by four other Syrians during his trip to Turkey, according to media reports. After a brief stay with the four in the same house, he disappeared. Security sources quoted by the media said four men were among the detainees Ala mentioned. Five men first arrived in Şanlıurfa, a town on the Turkish-Syrian border, before they headed to the capital, Ankara. After a stay in various houses in the capital, they traveled to Istanbul.

The rest of the detainees were linked to al-Mukhabarat. Security forces found Fadli made multiple calls to a man reportedly working for the Syrian Consulate while he was staying at hotels and guest houses for refugees in Istanbul's Zeytinburnu district – where he was registered as an asylum seeker – and in Fatih where Sultanahmet Square is located. The man identified by the code name "Dr. Sinan" is accused of masterminding the attack, and worked as a double agent for DAESH and al-Mukhabarat, a report in Sabah newspaper claims.

Fadli, carrying a suicide belt laden with RDX and TNT explosives, walked to an entrance of the square and approached groups of tourists around an ancient obelisk around 10:20 a.m. According to a police probe, he failed to trigger the hand grenade he used to detonate the explosives during his first attempt but succeeded on his second try.

Reports on the suicide bomber's past life revealed conflicting loyalties within his extended family. Fadli is a son of a Syrian family who returned to the country 15 years ago after living in Saudi Arabia for years. He was working at a furniture store before the 2011 uprising. Fadli first joined the rebel groups fighting the regime of Syrian President Bashar Assad before joining DAESH. A Turkish daily reported Fadli was a relative of Hüsnü Mahalli, a Turkey-based journalist and writer known for his pro-Assad views. Another relative of Mahalli is a senior member of DAESH while his other relatives live in regime-controlled areas of Syria, according to media reports.

Speaking to reporters after visiting the scene of the attacks on Wednesday, Prime Minister Ahmet Davutoğlu said although the suicide bomber was linked to DAESH, the terrorist organization has evolved into "a group that can be easily used as a pawn by others." "If someone sought to contract DAESH against Turkey, they should know that Turkey is determined to take every action to crush their hopes," he told reporters on Wednesday. Davutoğlu also stressed that the suspect's itinerary in Turkey, his contacts and other details "reinforced our view that this is something [more than a DAESH attack] and there might be true orchestrators acting behind the scenes."

Fadli was not on a watch list designated for suspected DAESH members, authorities revealed Wednesday, raising concerns that the terrorist organization might resort to new tactics to dodge surveillance in Turkey. Security sources said DAESH turns to "dead" militants for suicide bombings, faking their deaths in Syria before sending them on missions abroad. Firas Abi-Ali, an analyst with the security consultancy, IHS Country Risk, told the Associated Press (AP) that the bomber's registration as a refugee hint at central planning by DAESH leadership, either to cover terrorists' tracks or incite backlash in Europe against Syrians massively heading to the continent as asylum seekers in the face of the ongoing conflict that has displaced millions. One of the most notorious examples includes two perpetrators of the November Paris attacks who were identified as two men registered as refugees in Greece with forged Syrian passports.

The terrorist organization had conducted attacks in the past in Turkey, though it was the first time a popular touristic destination was targeted. DAESH is blamed for a suicide bombing in Suruç, a southern border town, and twin suicide bombings in Ankara in July and October last year, respectively. The first attack, targeting a rally of activists, killed 32 people while the second one near a train station at yet another rally of activists, killed 102 people.

Ala said "a comprehensive investigation" into the Sultanahmet attack was underway while Germany announced a team of experts from the German Federal Criminal Police was dispatched to Turkey. German Interior Ministry officials said the team would work in cooperation with Turkish authorities in order to support the ongoing investigation and identification of victims. All victims were elderly German tourists who were on a sightseeing tour at Sultanahmet Square where iconic landmarks such as the Blue Mosque and Hagia Sophia are located.

Sultanahmet Square Thursday and Wednesday evening was the scene of vigils with people pouring in to pay tribute to victims. Sibel Satıroğlu, a Turkish tour guide injured in the attack, was among those laying flowers for the victims. Satıroğlu is credited for preventing more casualties at the scene. She was one of the first people to spot the suspect, and according to her interview with police, she shouted "Run!" in German to the group of tourists she was accompanying.

The attack came at a time of escalated efforts to clamp down on DAESH by Turkey, which is repeatedly openly threatened by the terrorist organization. More than 200 suspected members of the group were detained in nationwide operations one week before the bombing while authorities detained another 68 suspects earlier this week, including three Russians accused of providing logistical support to the militant group. Reports said the suspects were planning attacks in large cities.

Turkey detained more than 3,300 people as part of efforts against DAESH since it emerged in Syria and arrested 847 of them, according to Interior Ministry figures. A large number of DAESH suspects are foreigners. Turkey also banned more than 35,000 people from 124 countries from entering the country to travel to Syria to join DAESH and deported 2,894 others from 92 countries for connections with the terrorist group, according to official figures.
Last Update: Jan 14, 2016 4:07 pm
RELATED TOPICS