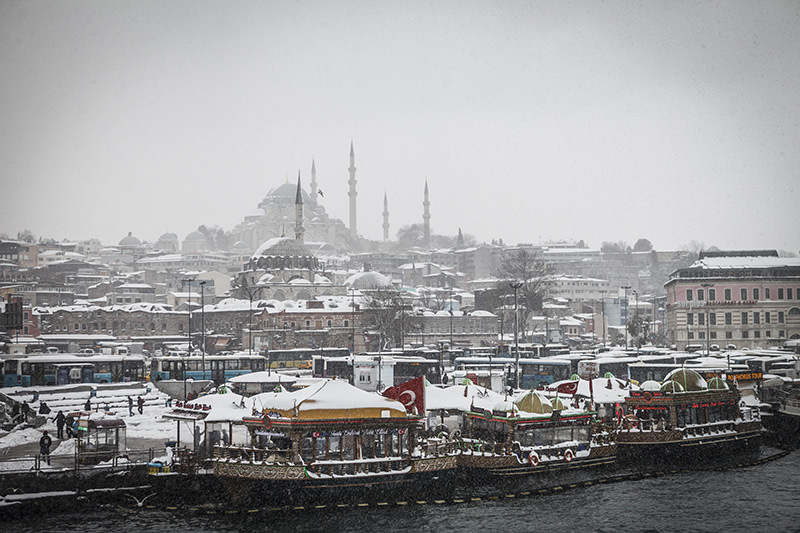 Hundreds of flights from Istanbul's Atatürk and Sabiha Gökçen airports, Turkey's main gateways to the world, were cancelled due to the heavy snowfall expected to become effective as of Sunday evening

Turkish State Meteorological Service (TSMS) issued a heavy snowfall warning for Turkey's northwestern parts, which is expected to be effective as of Sunday evening and throughout Monday.

These areas have been receiving a significant amount of rainfall in the last couple of days, and decreasing temperatures is expected to lead to snowfall. Snow thickness expected to reach over 20 centimeters in some areas. Officials also warned against icing on the roads and major highways. Temperatures are expected to dip well below zero.

TSMS also warned authorities and citizens against expected heavy rainfall and flooding in southern parts of the country.

Turkish Airlines (THY) announced cancellations for 246 domestic and international flights from and to Istanbul's Atatürk and Sabiha Gökçen airports on Monday. Passengers are advised to obtain info through THY call center or the company website.

Eastern Turkey is already in the full grip of winter, with temperatures reaching minus 22 degrees Celsius in the northeastern province of Ağrı, and much of the region under thick snow. Local agencies are working around the clock to open roads to dozens of villages, which have been inaccessible for days due to snow.
Last Update: Jan 17, 2016 3:23 pm
RELATED TOPICS