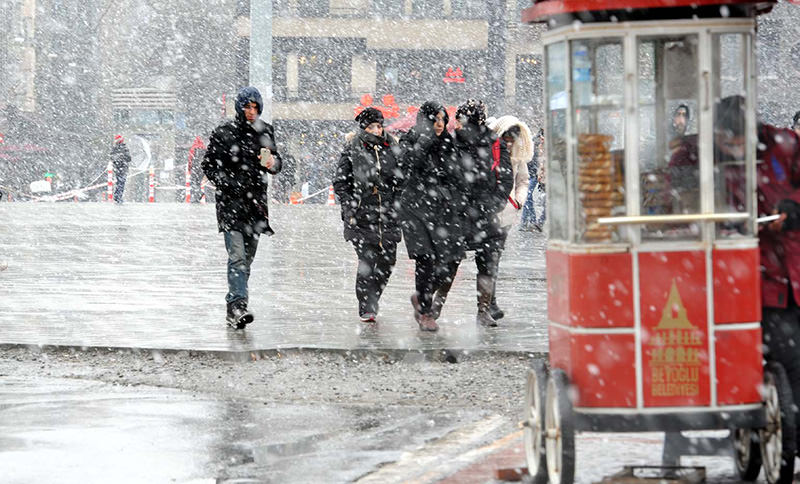 Heavy snowfall engulfed Istanbul on Tuesday, leading to the cancellation of flights and ferryboats, while the rest of the country has been grappling for the past two days with chilling weather and precipitation which closed roads

Crews struggled to keep the runways clear for incoming airplanes throughout the day, but the snow led to delays in landings, especially at Atatürk Airport, one of the busiest in Turkey.

Some passengers with canceled flights preferred to spend the night in airport terminals while others were accommodated at nearby hotels to wait for the resumption of international and domestic flights.

Snowfall also affected maritime transportation. Istanbul Fast Ferry and Sea Bus Company (İDO) announced cancellations for all ferries operating between the European and Asian sides of Istanbul on Tuesday as well as passenger-only ferries operating between the city and Bursa in the south. Several Bursa Sea Bus company (BUDO) passenger-only ferries between Bursa and Istanbul were also canceled on Tuesday.

Meteorologists say that bad weather from northwestern Turkey will improve on Wednesday and snowfall will be replaced by rain, although temperatures will remain as low as 1 degrees Celsius until Thursday. Meteorologists warn that strong winds will continue in Istanbul Thursday and temperatures will rise as high as 10 degrees Celsius Thursday and Friday.
Elsewhere in Turkey, people grappled with snowfall shutting down roads across the country. In the Black Sea city of Rize, three days of snowfall led to the closure of roads leading to villages and suburbs, while the roofs of several buildings collapsed under snow. No casualties were reported.

The capital Ankara was hit with a cold spell. Temperatures dropped as low as minus 22 degrees Celsius on Monday night, as parts of the city are on a vast plain. Though snowfall was scarce, chilling temperatures led to the freezing of small lakes in the capital.

In northern Turkey, a major road connecting central and eastern Turkey to the west saw a dramatic slowdown in traffic on Tuesday due to snowstorms. The Bolu Mountain Passage of the TransEuropean Motorway (TEM) and D-100 highway was clogged with snow, despite continuous efforts to keep the road clear, slowing travel in both directions.

Eastern Turkey, more accustomed to severe weather in winter, was hit hard by snowfall which closed the roads to remote villages. Authorities said roads to 1,513 villages and townships far from town centers remained closed on Tuesday. The lowest temperature was in Erzincan province at minus 21 degrees Celsius on Monday night. A blanket of snow as deep as 76 centimeters covered central parts of Ağrı, while snow reached as high as two meters on uninhabited hilltops.

Cold weather warnings will remain effective all across the country on Wednesday, although western cities will experience cloudy weather without precipitation. Temperatures for Istanbul are predicted to be as high as 7 degrees. Foggy weather with a temperature of minus 2 degrees Celsius is predicted on Wednesday for the capital, Ankara.
Last Update: Jan 26, 2016 4:03 pm