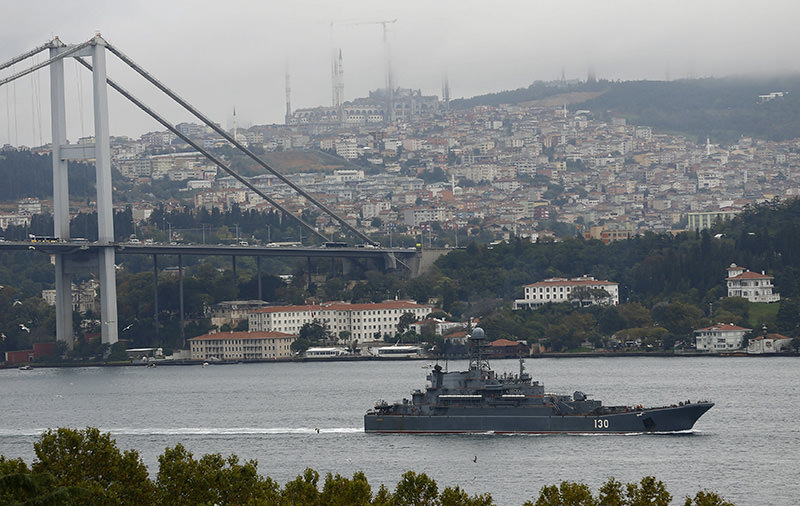 Russian Navy's large landing ship Korolev sails in Bosporus, on its way to the Mediterranean Sea, in Istanbul, Turkey, Oct 22, 2015. (Reuters)
by daily sabah
Feb 04, 2016 12:00 am
Istanbul's Metropolitan Municipality said on Thursday that the city would deploy surveillance drones starting in March to prevent further pollution of the Bosporus Strait from ships.

The municipality's environmental pollution control department head, Mustafa Tahmaz, said there was already a mechanism that was recording and photographing the ships' actions as regards to the pollution they were causing in the strait, but the city would now also start to deploy drones for a more effective surveillance.

""When needed, we conduct an inspection via helicopter within the context of a program. Starting in March, we will also conduct inspections using drones."

The city imposed fines totaling TL 2.8 million [$1 million] last year on 90 ships --28 of which were Turkish-flagged-- that polluted the strait among a "standard level". According to Tahmaz, 55 thousand vessels pass through Bosporus on an annual basis.

"Our teams have been conducting inspections 24 hours a day. When pollution [in the strait] is detected, then it is photographed, and video records as well as samples [from the strait] are obtained," Tahmaz said.

"The samples are analyzed and if the relevant ship is causing pollution above standard levels among its likes, then a penalty is imposed on the ship based on its size."
Last Update: Feb 05, 2016 4:36 pm