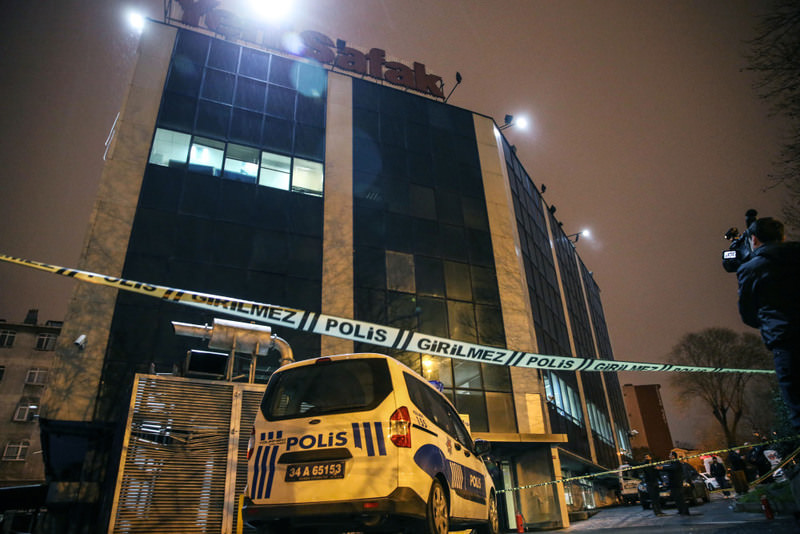 Masked assailants opened fire and hurled Molotov cocktails on Yeni Şafak and Yeni Akit newspapers early Thursday. The two newspapers are known for their anti-PKK coverage, while Yeni Şafak was the target of the leader of a party linked to the terrorist organization who thrashed the newspaper in a rally last year over the latter's criticism of the PKK and his party

Amid concerns about terrorism threatening the southeastern regions of Turkey, two newspapers known for their staunch stance against the terrorism were attacked early Thursday.

The first attack targeted Yeni Şafak daily. Five masked assailants hurled Molotov cocktails on the newspaper's headquarters in Istanbul's Bayrampaşa district at around 5 a.m. before firing a shotgun. The assailants fled as security guards rushed to the area while a small fire broke out due to the Molotov attack. Police arriving at the scene found a bag full of Molotov cocktails left behind by the assailants and empty cartridges.

About half an hour later, a group of masked assailants suspected of being from the same group that attacked Yeni Şafak, launched an attack on the headquarters of the Yeni Akit daily in the city's Küçükçekmece district. Assailants hurled Molotov cocktails on cars in the building's parking lot and fired shotguns at the building. Suspects then fled while no casualties were reported in both incidents. Police took strict security measures at the two buildings following the attacks.

Yeni Şafak was severely criticized by Selahattin Demirtaş, co-chair of the Peoples' Democratic Party (HDP), which is affiliated with the terrorist organization PKK that currently conducts a campaign of violence in southeastern Turkey. Demirtaş crumpled up the newspaper during an election rally last year and threw it to the ground after condemning the articles in the newspaper. Following the criticism, Yeni Şafak editor-in-chief İbrahim Karagül accused Demirtaş of "making Yeni Şafak a target for the terrorist organization." "Apparently you want militants to attack our offices," he has said in a statement published on the newspaper's website following Demirtaş' criticism of his newspaper.

Messages condemning the attacks poured in. Speaking at an event yesterday, President Recep Tayyip Erdoğan "strongly condemned" the attacks. Erdoğan said he would "see what those who raised their voice over the scuffle in Hürriyet, those outraged over a broken glass door will say to attacks on Yeni Şafak and Yeni Akit." He was referring to a scuffle during a protest against the daily Hürriyet last year. The glass door of the building was damaged in the scuffle. Critics of Hürriyet have claimed the door became "a type of shrine" after prominent names including HDP Co-Chair Demirtaş were photographed curiously examining the glass door. The protest was against Hürriyet's "defamation campaign" targeting the government, according to protesters. Erdoğan also said he would wait and see what "members of a party making those newspapers a target for a terrorist organization and throwing it on the ground" do, in reference to Demirtaş.

Daily Sabah Editor-in-Chief Serdar Karagöz said Daily Sabah condemned the attacks that "targeted press freedom." "Yeni Şafak and Yeni Akit are two media outlets with prominent anti-terror coverage who are against terrorist organizations active in Turkey. The possibility of the separatist terrorist organization and far-left terrorist organization, which is known for its attack targeting the U.S. Embassy in Ankara, being involved might be debated," he said, respectively referring to the PKK and Revolutionary People's Liberation Party-Front (DHKP-C), the latter which conducted an attack against the U.S. Embassy in Ankara in 2013.

"The media should be united in solidarity against the attacks. I also hope journalists' associations, journalists, media nongovernmental organizations sensitive to media freedoms and foreign missions and diplomats in Turkey known for their awareness of media freedom express their reaction to these attacks. These are clearly terror attacks targeting two newspapers solely for engaging in their duty of reporting. I hope the perpetrators of the attacks are found as soon as possible, and the investigation will shed light on the attacks," he added.

Media Association, a leading non-profit organization of journalists, issued a statement condemning the attacks and said the assaults were "likely an organized act of terrorism."

"These attacks aiming to destroy freedom of thought and expression, to prevent journalists from doing their jobs would fail to accomplish what they set out to do," the statement said. The association also invited the public, fellow journalists, politicians and others to express solidarity with the two newspapers. Speaking to Anadolu Agency, Media Association President Ekrem Kızıltaş said assailants and those masterminding the attacks "apparently sought to change newspaper publication policies by force." Kızıltaş said two newspapers have already faced threats and attacks in the past but "never changed their stance." "These attacks would not change it and I believe it will further motivate them to pursue a policy of publication to serve Turkey's interests," he said.

John Bass, U.S. ambassador to Turkey, said in a statement published on the embassy's Twitter account that violence against journalists was "always unacceptable." "A free and diverse press is essential to a democratic society. We defend Yeni Şafak and Yeni Akit's right to print and report without fear of reprisal, as we do every journalist's," he said.

Yeni Şafak and Yeni Akit openly support the government's anti-terror operations against the PKK as well as other terrorist organizations. Star, another newspaper supportive of anti-terror efforts, was the target of a bomb attack last year. Suspects linked to the Marxist-Leninist Communist Party (MLKP), which is recognized as a terrorist organization, planted an explosive device in the courtyard of the newspaper's headquarters in July 2015, but police managed to defuse the bomb before it went off.