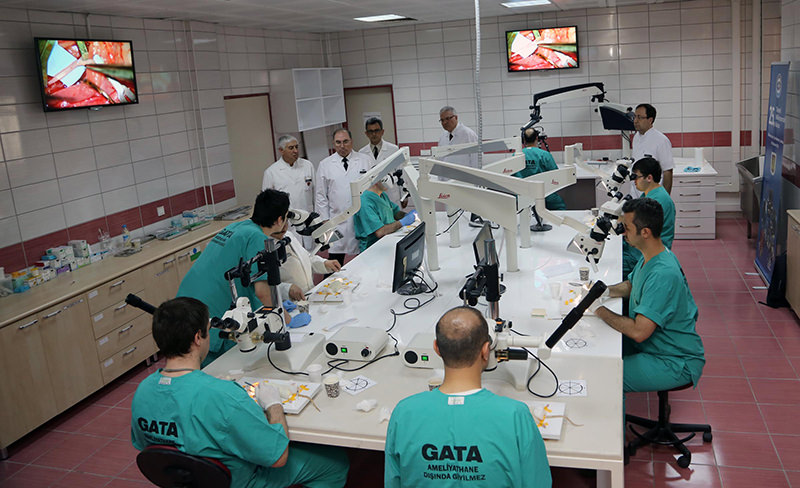 | DHA Photo
by Daily Sabah Mar 03, 2016 12:00 am
Many specialist surgeons with an interest in microsurgery have come to Istanbul from all corners of Turkey and the world to attend the 20th annual medical training course organized by the Gülhane Military Medical Academy (GMMA) Microsurgery Research and Application Laboratory.

In the training program led by acknowledged experts, including world-renowned Zurich University microsurgery specialist Rosmarie Fricke and the head of the GMMA's Department of Hand Surgery Assoc. Prof. Dr. Mustafa Kürklü and his team, surgeons will be trained to operate on veins 'as thin as two strands of hair' under powerful microscopes and become finger transplant specialists.

Surgeons, military and civilian medical and security staff are trained in specialized microsurgery procedures and techniques in cadaveric workshops throughout the course.

Prof. Dr Rear Admiral Hayati Bilgiç, who is one the course leaders, said that the GMMA has been operating on many veteran soldiers that have lost hands or fingers in clashes with terrorists. Stating that the GMMA will be working together with four universities to perform hand and face transplants, Bilgiç said they were awaiting appropriate donors so that they could perform the transplants with microsurgical measures.

As doctors cannot perform microsurgical procedures without a course certificate, the program sees many participants every year.

The microsurgery laboratory, which is the only microsurgery lab in Turkey and among the very few in the world, was founded by Prof. Dr. Mahmut Gazi Yaşargil who has been hailed as 'one of the greatest neurosurgeons of the 20th century'.

The Microsurgery Research and Application Laboratory was renewed in 2014 to become a world-class microsurgery laboratory and has trained around 197 military surgeons on microsurgery so far.

The GMMA is described as "a unique military institution with scientific autonomy and trains military physicians and other health personnel for Turkish Armed Forces (TSK). The academy carries out scientific research and publications, gives vocational, undergraduate, and postgraduate training and education, and whose training hospitals serve as the tertiary reference centers for the 43 military hospitals of TSK. GMMA is the first medical institution of Turkey and it served as the foundation of some schools of medicine. It was the only health institution in Turkey to celebrate its centennial in 1998," on its official website.