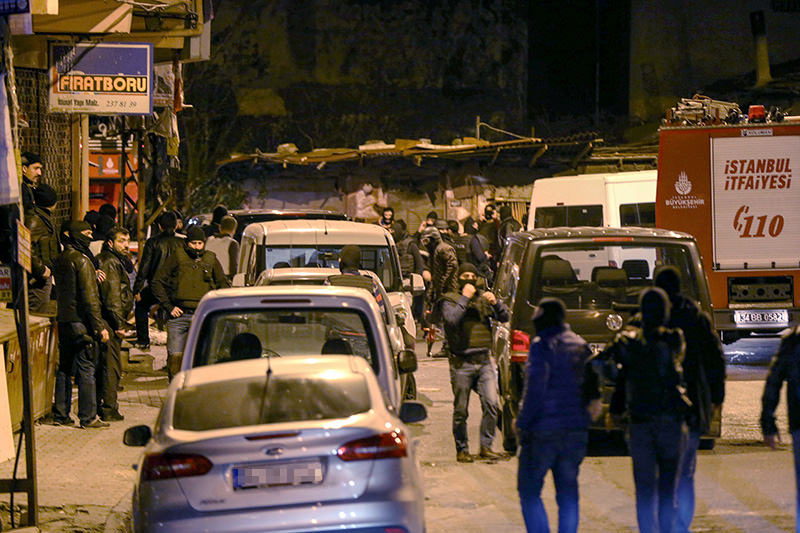 Police in Istanbul conducted a raid Wednesday on a building where DHKP-C militants were meeting, following complaints from several families that their children under the age of 18 were brainwashed and recruited by the group

Police detained six people Wednesday in an operation on Revolutionary People's Liberation Party-Front (DHKP-C) militants. The counterterror operation in Istanbul came after several families filed complaints with the police that their children were missing and were likely brainwashed to join the terrorist group.

Counterterror police with armored vehicles and helicopters raided a building where the Youth Federation, a DHKP-C branch, is housed. The building has been the scene of multiple operations in the past that netted dozens of militants blamed for a recent string of attacks in Istanbul. Police stormed the building, which had windows with iron bars and multiple steel doors, with the aid of firefighters.

Among the six suspects were three teenagers under the age of 18. The suspects confronted police and burned documents used in their propaganda, as the police made their way into the building.

Media reports said families of two suspects captured in the operation had earlier filed a missing person's report concerning their children, although those families were not among those who appealed to police to retrieve their children from the DHKP-C, which paved the way for the operation.
The DHKP-C was allegedly planning joint attacks with other terrorist organizations, including the PKK, which is currently involved in almost daily terror attacks in the southeast, and the Marxist-Leninist Communist Party (MLKP), a group with a far-left ideology similar to that of the DHKP-C.

Media reports said the suspects detained Wednesday were planning attacks on the upcoming anniversaries of the death of Berkin Elvan and the Gazi neighborhood riots. Elvan died on Mar. 11, 2014, after spending months in a coma inflicted by a teargas canister that hit him in the head, while the 15 year old was reportedly at Gezi Park in Istanbul in 2013. The DHKP-C staged riots last year under the guise of remembering Elvan. The terrorist organization, which attempts to draw sympathy from the Alevi community, had also staged riots in remembrance of the 1995 incidents in Istanbul's Gazi neighborhood where riots broke out over police inaction over attacks on coffeehouses in a predominantly Alevi neighborhood on March 12, 1995.

The DHKP-C, although less influential in Turkey than other terrorist organizations, such as the PKK, still represents a considerable threat to the country, having conducted a string of attacks in past years. The group was behind a suicide bombing that targeted the United States Embassy in Ankara in 2013 and the killing of a prosecutor in the main courthouse in Istanbul in March 2015.

The DHKP-C was founded in 1978. Purportedly supporting Marxist-Leninist ideology, it was most active during the late Cold War era. The group revived its attacks in recent years. It is listed as a terrorist organization by Turkey, the U.S. and the EU.

The group's latest attack targeted the headquarters of a riot police unit in Istanbul's Bayrampaşa district last week. Two DHKP-C militants were killed in a building they fled to after they injured two police officers. Police were on the alert for the terrorist organization after several members of the group entered Turkey from Greece where they were released last year after a brief detention. Two militants, one male and the other female, planning to launch attacks, were captured in the western province of Aydın where they secretly arrived by boat from Greece. Two other DHKP-C members who are believed to have snuck into the country from Greece are still at large.

Security concerns are high in Turkey, which has been beset with terror attacks in the southeast and most recently in Ankara.

The DHKP-C is among the terrorist organizations active in Turkey that is alleged to recruit teenagers as militants. Okmeydanı, a working-class district where Wednesday's operation was conducted, is among the neighborhoods where the group recruits youth disillusioned by unemployment. The DHKP-C generally employs teens for street riots rather than direct terror attacks.

Teenagers are more common in the PKK, a major terrorist organization in Turkey, according to a report from state-run Anadolu Agency (AA), which claims the group has 2,000 children in its ranks. AA bases its figures on reported child abductions and the number of complaints filed by families claiming their children were persuaded by the group to join them. Two years ago, families in Diyarbakır, a predominantly Kurdish city in the southeast, staged a lengthy sit-in calling for the PKK to return their children, who were mostly underage minors. The PKK denies the claim, although a small number of children who fled the militant group based in Northern Iraq reunited with their families following the sit-in.