Istanbul by the sea: New bus might solve traffic problem 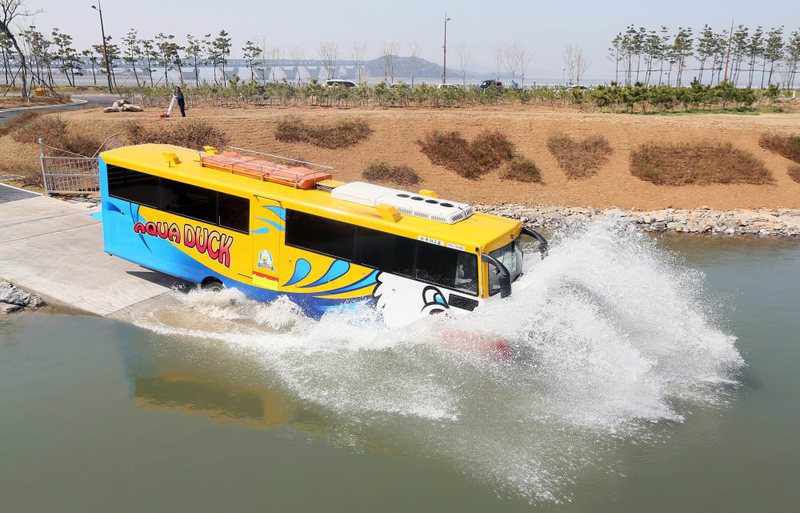 by Daily Sabah Apr 09, 2016 12:00 am
No matter whether you drive, take the subway or hitch a taxi, getting around Istanbul is problematic, especially during rush hour in Turkey's most populous city. Traveling between the city's Asian and European sides is worse, although an underwater tunnel helps ease the traffic.

Now, an amphibious bus developed by South Korea might offer a unique solution to the city's traffic problems as well as offer a new way of sightseeing by the Bosporus. Turkish and South Korean business figures recently met in the Netherlands during an international business forum and signed a preliminary agreement to bring the South Korean vehicle to Turkey. Turkey's All Industrialists and Businessmen Association (TÜMSİAD) and a group of South Korean investors joined forces to develop the amphibious bus, often shortened to "amphibus," for Turkey. TÜMSİAD President Yaşar Doğan said the bus will be used not only in Istanbul but also other cities around the Turkey, and it will especially contribute to tourism revenues. Doğan said with the agreement, they are expected to start production of the vehicles in Turkey in the near future.

Amphibus, currently in use in South Korea, the Netherlands and a few other countries, is planned to be used Bosporus as well as in routes between İzmit, Yalova and Bursa, cities near and adjacent to Istanbul.

South Korea introduced amphibuses along a scenic waterway in the city of Incheon last year. Along with regular tires, the buses have propellers and a powerful engine that enables maritime journeys.

It remains to be seen how it will impact Istanbul's traffic, described as one of the worst in the world, according to an index by a company manufacturing digital navigation systems for vehicles.
RELATED TOPICS