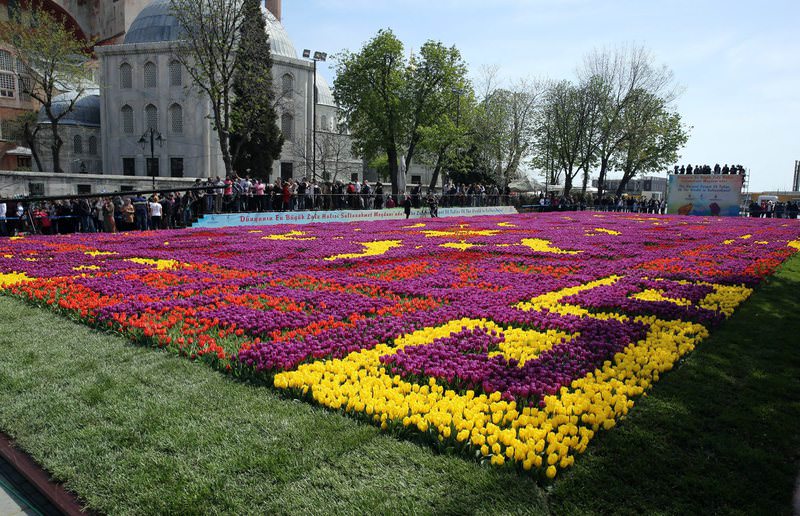 The Istanbul Metropolitan Municipality is displaying the world's biggest "tulip carpet" to visitors in the city's historic Sultanahmet Square on Sunday.

Covering 728 square meters at the historical square, the tulip carpet has 563,000 tulips and can be seen until April 30. Speaking at the opening ceremony, Istanbul Deputy Mayor Ahmet Bilal Kıymaz said that thousands of tulips were planted around the city as part of the 11th Tulip Festival.

Running until April 30, Istanbul Tulip Festival began at Emirgan Grove on Saturday. This green space has long been associated with tulips, and the special garden was established to revive the city's tulip tradition.

The festival will feature local music groups, marble- and glass-making artists, as well as stands selling tulip-themed products. Craftsmen will also design tulip-inspired items made of crystal and silk. A photography competition titled "En Güzel Lale" (The Most Beautiful Tulip) will take place for those who like to photograph tulips blooming in gardens, groves and mansions around Istanbul.

For the festival, millions of tulips were planted not just at the main festival venues, but also at Yıldız Grove, Beykoz Grove, Fethipaşa Grove, Hidiv Çubuklu Grove, Büyük Çamlıca Grove and Gözdağı Grove.

The festival is organized by the Istanbul Metropolitan Municipality. In 2005, the municipality launched a project titled "Tulips Return Home," and the country has become a tulip exporter, as many villages close to Istanbul along with various provinces and districts of Anatolia, have started producing the flower in the last decade.