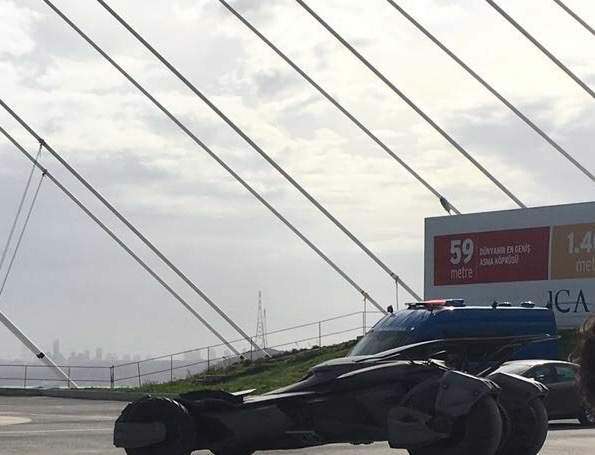 by Daily Sabah Apr 20, 2016 12:00 am
Batmobile crossed Istanbul's third bridge Tuesday. Last month, it was brought to Turkey via a special transportation operation by Turkish Cargo - the cargo wing of the country's flagship carrier, Turkish Airlines (THY) - and taken to the construction site of the Yavuz Sultan Selim Bridge, which will be the longest and largest suspension bridge in the world.

The Batmobile was used in the movie "Batman v. Superman: Dawn of Justice" that opened in theaters on March 25 and was sponsored by THY. This event is aimed at promoting both THY and Istanbul. As part of THY's sponsorship of the blockbuster, Turkish Cargo was the transportation sponsor of the film, and the company had first transported the Batmobile from New York City's JFK Airport to London where the vehicle was then brought to Turkey.

The model container, prepared three weeks before the preparation of the real vehicle, was tested on a cargo flight between New York City and Istanbul. Turkish Cargo will also transport the Batmobile to other events to promote the film.

Meanwhile, thousands of employees and engineers are working nonstop so the Yavuz Sultan Selim Bridge can become operational by August. The bridge is expected to alleviate traffic on the existing Bosporus bridges and will help to ensure safer road transportation in the city.
RELATED TOPICS