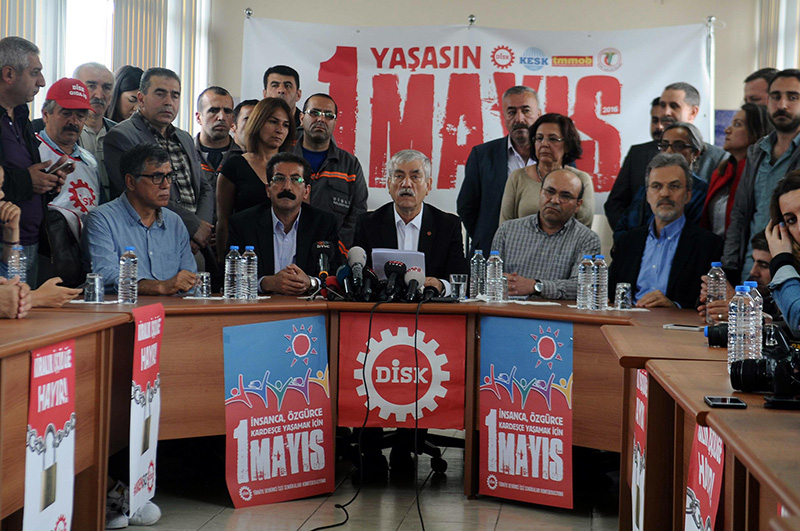 The government and major trade unions have agreed on May 1 Labor Day celebrations to take place in Istanbul's Bakırköy district instead of Taksim Square, Labor Minister Süleyman Soylu announced on Tuesday. Soylu added that a symbolic commemoration ceremony will take place in Taksim.

In a joint press conference, DİSK Chairman Kani Beko said that they have agreed for this year to celebrate May 1 in Bakırköy, citing their main concern is security of celebrations. Beko said the Istanbul Governorate turned down their request for celebrations at Taksim Square. "There is a tense atmosphere in Turkey due to acts of terrorism. So we decided to celebrate the day in Bakırköy for people's safety," he said. Beko said he and the leaders of other labor unions would visit Taksim on Labor Day to lay flowers at the site where the deaths in 1977 took place.

Commenting on the labor unions relocating the rally to Bakırköy, Interior Minister Efkan Ala said he was pleased to see that they acted in a way that both the nation and police want. "We will take all measures so that people marking Labor Day in Bakırköy will be safe," Ala told reporters yesterday in Ankara.

However, it is not clear whether smaller or militant groups will abide to this agreement and tight security measures are expected take place in Taksim on Sunday. Last year, members of labor unions and several radical groups clashed with police across Istanbul and dozens of people were detained as they resisted the forced dispersal of rallies. Some threw stones and Molotov cocktails at riot police.

Besides being Istanbul's main public square, Taksim also holds symbolic importance especially for left-wing parties and trade unions as 34 people were killed and dozens were injured as unidentified assailants fired on hundreds of thousands of people celebrating May 1, 1977. Five people were killed by gunshots, while 29 others were killed in a subsequent stampede and police intervention. As Istanbul's martial law authority banned celebrations in Taksim in 1979 amid ideological terror, clashes between left-wing groups and the police around the square have become an annual routine. May 1, 1996 celebrations in Istanbul's Kadıköy district saw three participants dead and dozens injured amid clashes with police.

Previously a national holiday, May 1 celebrations were altogether banned by the military administration that took power in 1980, until its status restored in 2008.

May 1, 2009 saw a sizeable group allowed into the square, while in 2010, 2011 and 2012, mass celebrations took place in the square without major problems. However, with the start of Taksim redevelopment plan and due to ongoing construction, the square was closed for celebrations in 2013, leading to severe clashes after four years. Police crackdown on May 1 protesters at that time was one of the key reasons that paved the way for mass participation in Gezi Park protests that erupted at the end of the month.

Since then, Taksim Square remains closed for mass celebrations with security reasons and unfinished redevelopment construction; and Istanbul returned to its annual routine of clashes.