The difficulties of being a vendor selling simit, Turkey's top snack 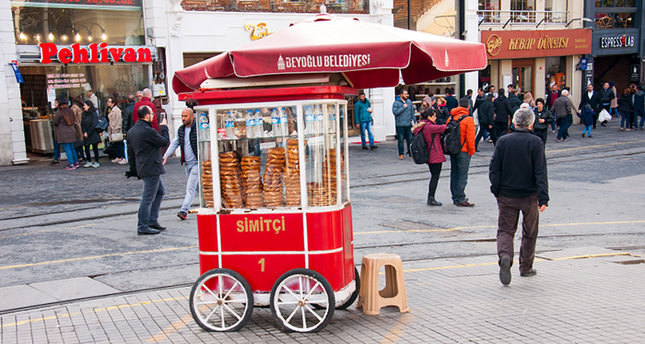 Fifty-eight-year-old Burhan Yılmaz is on his feet for more than 12 hours a day, selling the main fuel for millions of busy Istanbul residents-simit, the legendary Turkish bagels with sesame seeds.

Burhan is one of thousands of other street vendors in Turkey's most highly populated city, selling what could be the country's most popular snack to hundreds of customers each per day.

"Do you have any crunchy simit? Give me a crunchy one please," one customer asks Burhan on a sunny Friday morning.

"Our working conditions are already tough, but it gets worse in the winter," says Burhan, who sells simit inside a carriage or a trolley from 5 a.m. to 7 p.m. every day. These carriages can be found in almost every corner of Istanbul.

"In winter, you're standing up and having to face the wind, snow, mud and even a storm…our feet are shaking from the cold in the winter," he says.

And the reason why, according to Burhan, is because there is always a high demand for simit among Turkish workers, students and tourists looking for a quick and cheap snack while on the way to work in the congested city.

"I love [simit]; it tastes good and doesn't upset my stomach in any way," says Serpil Ulak, a customer of the simit street vendor, who sells the circular loaves for 1.25 Turkish lira ($ 0.44) each.

Serpil says she eats simit at least three times per week. Simits are made inside thousands of bakeries from 3 a.m. until 2 p.m., according to Burhan.

These are later brought to the trolleys or carriages run by the street vendors. However, simit vending is not a one-man business as most share shifts, according to Burhan.

"A simit vendor who works from morning to night will have other needs to meet as well, including taking care of the household and going to the mosque to pray," Burhan says.

According to Turkish history professor Halil Sahillioğlu, historical archives indicate the production of simit dates back to 1525 during the Ottoman Empire. The 17th-century Ottoman traveler Evliya Çelebi also wrote about 70 simit bakeries functioning in Istanbul in the 1630s.

Today, simit has even been franchised on a global scale, as Simit Sarayı [Simit Palace], a bakery and coffee shop enterprise launched in 2002, has opened shops in London, New York and Brussels.

But according to Burhan, the Simit Sarayı shops are more suited for customers who have a larger budget and the time to sit down for a chat.

"Simit Sarayı are located in central areas; not in road crossings where people pass to get to work," he says. "These are places for people to sit down and have a conversation while drinking tea."

Share on Facebook Share on Twitter
Previous in Istanbul The Istanbul Metropolitan Municipality has introduced a bike rental... Next in Istanbul Authorities announced that streets leading to Taksim Square will be...
DAILY SABAH RECOMMENDS