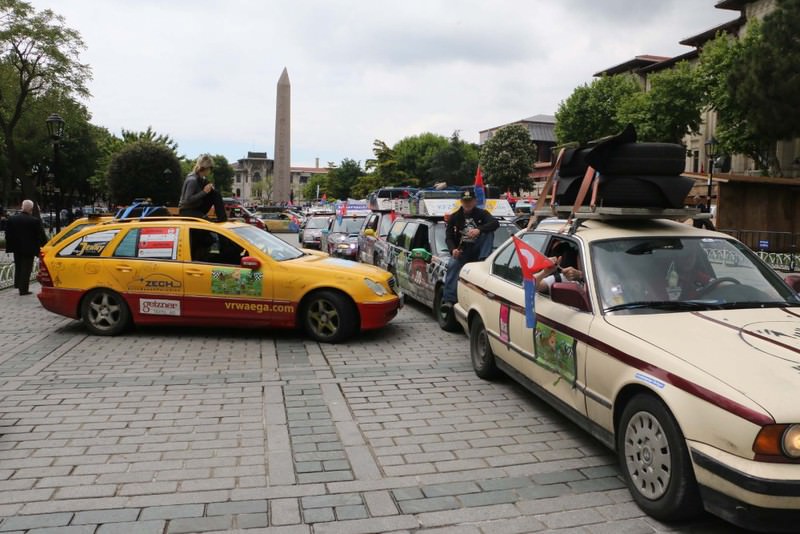 Four months after a suicide bomber killed 12 German tourists in Istanbul's Sultanahmet Square, a rally organized by a German group arrived at the historic square on Thursday in defiance of terrorism

The Allgau-Orient rally, an international event organized by a team of German and Turkish nationals living in Germany, started their Turkey stage with a ceremony at Istanbul's Sultanahmet Square on Thursday. The square saw 12 German tourists and a Peruvian national killed in a suicide bombing in January. Yesterday saw German drivers, accompanied by drivers from other countries, lined up to kick off the rally, which will stretch to Georgia in defiance of threats from terrorists.

Volkan Bozkır, the minister for European Union affairs, attended the ceremony and said the choice to begin the rally near Sultanahmet was a clear message demonstrating unity in the face of terrorism, and showed the public will not bow to terrorist threats. "We lost our German brothers and sisters here when terror revealed its ugly, indiscriminate face, targeting people regardless of their ethnicity or religion. So we start the ceremony here today at the site where they died, by laying flowers in memory of the victims," Bozkır said, as rally participants observed a minute of silence and left carnations at the attack site. The minister said although the rally is 11 years old, this year's rally was especially meaningful as its Turkey stage started at a place where terrorists (known to work on behalf of DAESH) claimed lives. "We have 600 participants from 20 countries, and this is the best way to show that terrorism will not deter or scare people. I congratulate the organizers for keeping Istanbul as part of their route and hope that we will be here again in the coming years for the rally," he said.

The Allgau-Orient rally, also known as the West-East Friendship and Peace Rally, is now in its 11th year. Bozkır said Turkey would demonstrate the rally's theme of friendship and peace. "You will be welcomed with friendship and peace during your stay in Turkey, and you will see cities that hosted numerous, diverse civilizations over the centuries. All the places you will visit are known as fertile grounds for a culture of peace and tolerance."

The rally is not a racing event per se, but rather serves as a platform for bringing together people from different countries. It was organized by an association bearing the rally's name, which was founded in Germany's Oberstaufen by a group of German and German-Turkish citizens. The rally traditionally ends in Jordan, and the winner of the rally is awarded with a camel. However, conflict in Jordan's neighbor Syria forced organizers to change the final destination to Tbilisi, Georgia. More than 500 drivers from 20 countries are participating in the rally, which has already crossed Austria, Italy, Slovenia, Croatia, Bosnia-Herzegovina, Serbia, Macedonia and Bulgaria before arriving in Turkey. The rally's Turkey stage starts in Istanbul and ends in Muğla in southwestern Turkey, before participants travel from the west to northeastern city of Ardahan. A Turkish team led by Turkey's Cologne consul-general also participate in the rally. Only vehicles made more than 20 years ago are allowed in the rally.
RELATED TOPICS